Tales: Why We Should Never Eat the Easter Bunny

Each Easter, we have the opportunity to observe the intricate mythology of the Jesus of Nazareth story in it's full flower, but the nature of the myth will never be the same in the wake of the Nag Hammadi and Qumran discoveries, whose effect these many years later, is still just beginning to percolate through Christian consciousness. Through layers of dense imagination and irrevocable deception.

One of the great beauties of memory is it's editing and art direction. Important memories are seldom pale, seldom lacking in romantic significance. The tremendous power of the Jesus myth comes from a powerful fleshing-out of such romantic, spiritual ideas, on an incredibly personal level. The idea that one pure, com-passionate soul can serve as a stand-in for every human experience - innate understanding and forgiveness; utter humiliation and defeat; glorious transcendence, and victory beyond imagination - is a brilliant, though most probably, accidental construction on the part of the early church fathers, who were led to their form of the myth by popular opinion, and unscrupulous intentions.
As consciousness, and information accrues in our world of ever-more detailed discovery, a number of different mythologies can emerge from the same set of limited facts. So, as long as we're allowing our imaginations to take over, which we are always doing when it comes to "The Greatest Story Ever Told," I'd like to try one on you myself. It's why we should never eat the Easter Bunny.

There were three branches of the Hebrew faith during the period of the second Temple of Herod in Jerusalem: The Pharisees and the Saduccees occupied the center of political power. The Essenes occupied the political fringe, being too sincerely spiritual to take part in the power struggles, misinterpretation of basic scripture, or schedule of incessant brutal sacrifices. The Essenes were the Christians before Christianity, believing in "Thou Shalt Not Kill" without exception, as well as social equality, compassionate sharing, and most all the other characteristics ascribed as principles of Christianity. 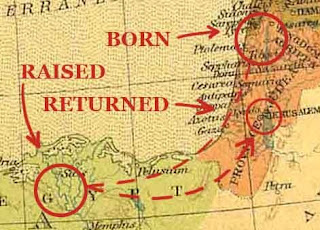 Yeshua Ben Yosef, the Essene teacher most likely at the heart of the Jesus myth, was not from Nazareth, there was no Nazareth – it was formed later, when members of the Nazarene branch of Essenes settled in that area. Yeshua himself was most likely from the area near Galillee, spent some childhood between Jerusalem and northern Judea, possibly coming under the influence of the Theraputae branch of Essenes at Mt. Carmel. As a youth, he was very likely relocated from the regional control of the "corrupt" Temple in Jerusalem by his parents to the Essene settlements in the Nile Delta of Egypt, near the temple there, where he would have been influenced by the cultural crossroads of Alexandria, and possibly learned about Theravedic Buddhism from the nearby mission. It was there, near Lake Mareotis, where the practice of baptism originated, that the young Yeshua may have developed his unique synthesis of pragmatic, mystical spirituality, grounded in the Tanakh, and that regions particular branch of Essene Hebraism, which was steeped in Theravedic Buddhism.
The extent of his travels are unknown, but it is known that in middle life, the Rabbi returned to Galillee to teach, setting off the possible course of events roughly described in the narrative gospels. If we consider this possible origin of Yeshua, and believe the narratives to be fundamentally true, then a further re-interpretation might make sense too:

His awareness of East Asian philosophy would contribute a great deal to his unique teachings, particularly as described in the non-narrative "Gospel of St, Thomas," unearthed at Nag Hammadi in the 1940's, after nearly 2,000 years of suppression. The principles of the Essenes also mesh perfectly with the thoroughly pacifistic notions of basic Buddhism, including complete temperance in the ingesting of intoxicants, the rejection of pagan rituals of sacrifice, and the strong tendency to vegetarianism, which was a strict Essene practice; though to Yeshua, same as the Buddha, it was somewhat dependent on what a mendicant could find to eat, as long as the killing wasn't intended solely for their consumption.

What would have been certain though, would be the utter disgust an Essene teacher would experience returning to the Jerusalem Temple to find it's outer yards filled with animals being traded for sacrificial slaughter. As the temple devotee would find upon arrival, their sacrificial animals did not meet rigid temple requirements and would have to be traded, at a fee, for ready-to-sacrifice animals. Hence the "money changers," changing animals for money. The sacrificial firepits were huge barbeques, where cooked meat was used as payola to buy allegiances, and reward the elite. Animals were treated ruthlessly, as many "devout" people continue to treat them today. The whole place was run by a conspiracy of Hebrews and Romans. An Essene activist could get pretty upset by such a scene, as did many observant Hebrews.

An alternative explanation for the true meaning of The Eucharist comes about from this re-telling also. While it was a strict Essene practice to ritually share meals communally, it is extremely unlikely that a humble, Eastern-influenced mystic Rabbi would resort to pagan quasi-cannibalistic ritual to commemorate himself as being "God on Earth," while it is quite likely that in the context I suggest, he would hold up a piece of bread and say: "This is my flesh," meaning not that bread was to serve as a stand-in for the body of a man who clearly did not wish to be deified, but was meant as a vegetarian's replacement for [corrupt] meat like that from the barbaric temple rituals. (Essenes didn't drink wine, so the "blood drinking" is highly unlikely as well). This may just be conjecture, but in reality, every other retelling is too.

It would also explain why the closest followers and companions of Yeshua in the wake of his departure, the Ebionites, were absolute vegetarians: Yeshua was very likely a vegetarian Buddhist Hebrew. That's why we should never eat the Easter Bunny, or any other animal. Thou shalt not kill is as hard and fast a rule to a Buddhist, as it was to an Essene.
I'll save the alternative story of resurrection for next Easter, as long as we'll be  making things up then too.

"The Kingdom is inside you, and it is outside you."
Logion 3, The Gospel of Thomas