Coping With Lunatic Leaders—This World's Like a Spiritual Elementary School 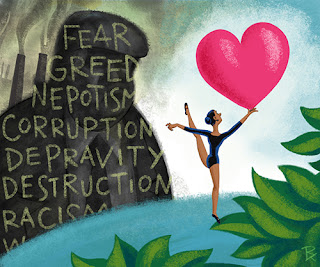 Our world seems like a pretty crazy place these days, with everything changing so fast—and particularly with all the lunatic leaders grabbing headlines. As population grows, it's inevitable that life is changing a little everyday, but when it comes to the sanity of many of the world's leaders (or often the apparent lack of it), some things may never change. If you think our global leaders are crazy now, imagine witnessing the fall of the Roman Empire and the antics of very disturbed people like Caligula or Nero (God bless 'em), the scourge of Ivan the Terrible, or the atrocities of Hitler's Holocaust.

There's one simple cause for this phenomenon that applies to all of human experience: that human expression originates from a wide spectrum of awareness—its beauties are enhanced by the degree of spirituality with which life is lived, its sufferings are exacerbated by the lack of that spiritual connection by some humans to what we might call Divine Consciousness.

Our most pressing difficulties arise from the fact that as more people appear on the planet, there are more people who delusionally associate themselves strictly with material aspects of living, and feel that they live separate lives—independent of all other life, and our shared Consciousness. They're trapped in the delusional primacy of our limited human intellects, and fall prey to the constraints of their egos and their unconscious desires for gratification and "control."

The result is that the spiritually sickest individuals are more driven (than spiritually-balanced folks) to act out their delusions of control and selfish gratification in order to ameliorate the personal sufferings of their karma—the cause and effect of their past and present life-actions. So we find it's often profoundly dis-eased people that are pathologically driven to gain positions of political power, because it's so much more important for them to try to control Life—to gratify the dictates of their self-centered delusions. The tragic lack of Consciousness in a minority of humans is what exacerbates all suffering in the world, and prevents the spontaneous realization of the kind of Paradise the Earth started out as—and is meant to be.

This relatively small minority is the cause of the self-destruction that has always plagued humanity, and is likely to continue to do so. I won't detail all their excesses (you probably know already), let's just say it has to do with hoarding resources, starting wars, exploiting Nature (and people), rigging elections, etc., etc. The world is often "led" by terminally self-centered sociopaths, and unfortunately, we have always been brought along on their lunatic ride.

The good news is that the ever-overwhelming majority of human beings never experience these lunatic impulses; so there are two very promising realities being created by the rising, shared Consciousness spreading into the world. The first lay in the forms of natural spiritual evolution evident in the level of environmental awareness—the growth of compassionate self-realization practices, such as yoga and meditation; the expanded understanding of the sentience of all the Earth's life and inherent magic of its quantum physical nature; the intuitive movement toward clean energy; and the instantaneous connections of technology.

The second reality is also a result of growing population—there are simply more highly spiritually-evolved souls present in this world everyday. These unstoppable evolutionary changes bode very well for the future of humanity on Earth, it's just that we must also suffer the destructive growing pains of the spiritually disconnected.

The bad news is that these people will never go away. This unconscious minority has always been amongst us, and always will be—that's the nature of human life, cycling through existence on Earth. Their persistence comes from the penetrating sense of fear they trade in, and in the seductive promise that there is a material solution to suffering, when real solutions are actually found in our spiritual nature.

The good news is that they aren't really the world's leaders—they're material impostors. The true leaders quietly, intuitively embody spiritual solutions. In terms of the profound evolution of all living things, every community's inevitable growing alignment with Divine Consciousness comes about not as a result of the fearful manipulations of misdirected charismatic demagogues, but as an energetic shift in the direction of a simple majority of the species—towards survival and spiritual evolution. The school, the flock, the majority of people, simply heads toward the light.

It wouldn't be wrong to imagine this world as a metaphoric elementary school, with grades one through six attending simultaneously, except in humanity's expression, everyone are "adults." The truth is (as always), a minority of particularly power-hungry, unconscious students aren't adults at all, they're spiritual children, acting out their unformed nature, responding to baseless fears and provocations. They answer a reactive urge to control things, and become destructive when they are forced to confront the fact: You can't control the Universe. That's not what's really going on here.

The sixth grade and the second grade are all here together, but no sixth-grader can change the karmic trajectory of any other student, they can only point them toward the light, by demonstrating the spiritually-liberating, growth-inducing principles of kindness, honesty, humility, compassion, forgiveness, and selfless service.

They can only—we can only (as we always have and always will)—try our very best to hold this persistently nasty mess together with Love, until the great flood of Divine Consciousness changes the world.

That is why we're here—to realize the transformative power of Love.

The book: How to Survive Life (and Death), A Guide To Happiness In This World and Beyond is now available everywhere, but ask for it it at your local bookstore! How to Get to Heaven (Without Really Dying) is due out early 2018, from Llewellyn Worldwide.
Posted by rjk at 1:09 PM No comments: