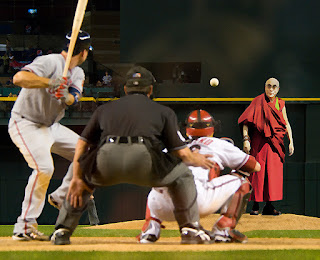 The other night I was watching the Yankees game and a televised political debate at the same time, switching back and forth, when I began to notice something strange happening. As the Yankees kept striking out, and the political misrepresentations kept piling up, a powerful feeling welled up inside of me, moved to center stage, and started directing my thoughts and comments with unwanted authority. It was a feeling of acrimony, of aggravation, of anxious agitation...and I'm still only on the "A"s.

"The universe exists in order that the experiencer may experience it and thus become liberated."           Patanjali

Suddenly I realized that somehow I'd just taken myself from a relatively serene state of mind to a discombobulated tangle of self-centered sensations – spontaneously arising opinions, judgments, perceived injustices – all the product of having momentarily attached myself to these two televised events. If I hadn't been watching I presume I would have been fine, calm and at-ease within that very same moment.
So as well as I could (after the shows were over) I returned my self to it's former tentative state of serenity, relaxed and refocused my mind on other, less aggravating thoughts, and made a note to try and not do that anymore. You'd think I would know by now, but they can come so automatically, those waves of thought and sensation, can't they?

It's in the nature of our sensory experience itself that I spontaneously respond to outside stimuli that inspires certain thoughts, which evoke certain feelings, and then engages a cascading circuit of thoughts and feelings that usually makes me want to do something about it, when there plainly isn't much I  actually can do – except maybe to calm down again. But why do I always have to go the long way around again? Where does this willingness to get myself all worked up again come from?
I called a mentor (whom I like to call Fascinating Ray), told him about this all-too-common loop I'd just taken again, and asked why I can so often condemn myself to that circular confinement, as opposed to remaining in an easier, less agitated state. He told me something that reminded me exactly why I call him with these questions; in essence he said this:

In the body-mind-spirit trifecta we experience in this life, there's an underlying intuitive sense of being stuck in this form, for the time being, subject to the electrochemical, physiological machinations of thought and feeling that "this flesh t'is heir too." It can feel like a kind of sadness, anxiety, dissatisfaction, or longing to "return to the garden," so to speak – and what's more, it's true – it arises from a subliminal reality, the innate understanding that our spirits can function on a much broader energetic level – lighter and freer – than simply being a human being allows us.
So, sometimes we unintentionally carry with us this "perspective of a prisoner," and part of our challenge in this life is to avoid being defined by that truncated view, and to allow our greater (spiritual) potential to be our friendlier guide through life. The trick in escaping that perspective, that self-created prison, lies in becoming aware of the thoughts and feelings that promote it; and also in recognizing when we might be taking on that role ourselves, sometimes intentionally, feeling like we need the excitement and anxiety to provide us with some kind of sensory encouragement.

"All life is a play of universal forces. The individual gives a personal form to these universal forces. But he can choose whether he shall respond or not to the action of a particular force. Only most people do not really choose – they indulge the play of forces."             Sri Aurobindo

Ray went on: There can only be limited growth when we're in prison, you know. There isn't the requisite space and variety of influences necessary to allow your world to expand in a healthy, balanced way; and so your world gets smaller, hemmed in by uncontrolled cascading thoughts and feelings. ("Isolation is a darkroom where your negatives are developed"). You repeat behaviors that don't really work, and eventually prove to be [destructively] defining, like 'em or not.
The cause of this self-imposed confinement is usually due to what a Buddhist might call "attachments," or "selfish cravings" – the identification of ourselves and our sense of well-being with some special interest or need that we feel is being threatened, has been slighted, or that might go unfulfilled. In short, the imaginary ideas of how we want to control our world that really end up controlling us:
People don't do things the right way; my ideals are under attack; there's a fundamental injustice at work in the world...some of which may really be the case, but unless we escape that mentality, that "prisoner's perspective," we'll never be able to muster the vision to find any meaningful solutions. To grow out of our imaginary, and real conundrums. We'll be stuck stacking up those blocks around ourselves, driven by that drumbeat, wondering why our world seems to be getting smaller, instead of evolving beyond the attitudes of confinement that this body-life often insists upon.

"Emanating from the finest ether, these souls become entangled...in the prison-house of the body...but when once they are released from the bonds of the flesh, then, as though liberated from long servitude, they rejoice and are borne aloft."                 Josephus, describing The Essenes' beliefs

It's right, in a way, to naturally want to identify myself with my team or my cause; it's part of what Joseph Campbell would call "the metaphysical impulse to transcend the delusion of separateness." It's a wish to be a part of something larger than myself; to effectively contribute to a worthwhile cause for humanity, to be of service; and to identify and share with others who believe what I believe, and give themselves to the ideals I'd wish for myself and others to experience in this life. Notice, none of what I really wish for has very much to do with winning, or with even being right.

That's where beating it does come in – by answering with a different kind of beat: call it to heartbeat it; using the shared heartbeat of the joy and creativity alive within us all, and in the world. That's what I had to do – open my heart to escape the corner I'd painted myself into. I needed to stop my thoughts, and liberate my heart to gain that freedom, that grace.

"There's no problem that acceptance won't help solve" is an axiom I don't naturally react well to, probably because it's so painfully obvious. The more elaborate my entanglements become (or I make them), the less likely I am to escape them. I need that open-hearted freedom. I need to change, to escape that "perspective of a prisoner." It's my choice, really...I could just turn off the TV, and actually do something about it; starting with accepting, relaxing, letting it be, and letting the world roll right off my shoulders...

Read about this and much more in:available direct on this page, or online. The first book: How to Survive Life (and Death), A Guide To Happiness In This World and Beyond is available the same ways – but ask for it it at your local bookstore!
Posted by rjk at 11:25 AM No comments: