How a simple shift in POV can change everything…An article on what I call "Objective Spirituality," at GaiamTV.

Objective Spirituality | GaiamTV
www.gaiamtv.com
Well, it’s that time of year –the beginning of a new one – when it feels like changes for the better may actually be possible. When it seems like there may be something we can do differently, some way we can improve things a little. Perhaps it’s just a convenient time to make promises to ourselves –…
Posted by rjk at 9:48 AM No comments:

The Spiritual Consciousness of Animals – A Vegan Resolution 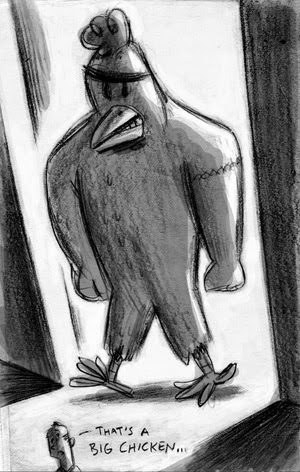 "I am the true Self in the heart of every creature...the beginning, middle, and end of their existence."
The Bhagavad Gita 10.20

In sharing this thing we call consciousness, we all share the singular expression of the creative source that takes place on this planet. We share what we might call "the Consciousness of Earth." Deep within us, we have a sense of the most basic elemental forces of the Earth; the deepest cold of the icy subterranean. The dense, smoldering pressure and heat of the innermost; the heedless baking burn of the unabated sun.

Deep within us, we know the natural experience of life, of the wild. We feel the elements as any animal does, and like any animal we live the play of forces that govern our needs for sustenance, for regeneration, for love in the form of the mysterious power of creation.
Look within yourself and you'll see that somewhere deep within, you understand the exhilarating speed of the cheetah, or the overwhelming seasonal sleepiness of the grizzly bear – especially on those days when it's tough to get out of bed. Likewise you can identify with the fear a young calf feels when surrounded by the slaughterhouse cries of his family; or the panic of a yellowtail tuna or porpoise as the indiscriminate mile-long nets of a fishing trawler scoop up the contents of your entire world.

It's not just humans that share the experience of this thin veneer of consciousness that tenderly wraps and energetically enlivens this planet, it's all life on earth. Despite our differences, species to species, we are all one thing: the consciousness on this earth.

"...my own true inner being actually exists in every living creature...[and] is the ground of that compassion upon which all true, that is to say, unselfish, virtue rests..."
Schopenhauer

Animals simply live their being. Their consciousness is joined with source purpose and intention, and so they attain a purity of experience within consciousness, through their senses, that humans seldom know. They have developed senses which allow them to live in a much richer world infused by light, sound, and electromagnetic wave perception that connects them to the field of being, and so they are not burdened by elaborately convoluted thinking, as are humans.
Being ignorant, and unwilling to experience or imagine the sublimely transcendent intelligence alive in the spirit/mind of a whale or an elephant, for example, the human ego denies all other creatures their true positions in the hierarchy of being, simply because it threatens human self-enhancement and self-importance. Also because it suggests a fatal assumption of human intelligence; that we have the "divine" right to kill animals for our own purpose – which is a conclusion based solely on delusion and ignorance. Some indigenous peoples have naturally found the way through The Great Spirit to respectably cycle the energies of hunted and farmed animals to meet their needs for sustenance, but this has little to do with the barbaric industry of animal subjugation and slaughter most of us contribute to today.

And, for those sticklers, I wouldn't suggest that a hungry crocodile wouldn't eat me, if given the chance. That's what he lives to do. Not to accomplish. Not to steward. Not to choose.

The fact is that the actual nutritional needs of the earth's entire population could be met in a much more healthful and efficient manner agriculturally, with a bare minimum of animal slaughter and consumption. (All the flavors, textures, and nutritional qualities that are supposedly exclusive to meat can be reproduced with vegetable substitutes) In this way, wildlife populations would be brought back into balance, and humans could begin to exercise their divine dominion over the other occupants of the planet.

Unfortunately, the regressive human psyche has developed an appetite for something else: the energy of fear. The collective human ego manipulates and exploits it's animal relatives, feeding on the energy of fear generated by this exploitation. Feeding on the bodies of our animal brothers and sisters while ignoring their actual place in the divine order of life, and, without properly honoring their sacrifice, failing to release their spirits with love, imbues people with a deep, negative energy of guilt and fear.
In this way, the collective human ego, the singular most destructive force in all being, enforces the separation of human individuals from the divine source of being, which is the consciousness of the earth. It also contributes to the build-up of the energy of fear at a cellular level in the bodies of meat-eaters that leads to the inability to perceive the spiritual on a personal and collective level, and provides those fear-triggers that are regularly exploited by unethical interests to elicit the ignorant and inhumane mass attitudes that so threaten all life on earth. Simply put, it's why there are far more fist fights at barbecues than at vegan yoga retreats!

It's this essential barbarism, and these more esoteric – even occult – systems of exploitation that we may know, deep in our hearts, but continually deny for the simple, insanely selfish excuse that for a few minutes "it tastes really good." For a direct example of this, consider the epidemic of obesity in our culture, so often blamed on soda pop and fast foods. The chemicals fed factory animal to make them grow at an abnormal rate are consumed by meat-eaters, who then grow abnormally as well. Factory animal production destroys our spirits, our health, and our environment.

The time has arrived in the evolution of humankind, to stop the barbaric and wasteful subjugation, cannibalization, and vanity slaughter of all crawling, walking, flying, swimming, thinking and feeling sentient creatures; and instead, to seek their wisdom of simple harmonious being-ness. And to stop and redirect the earth's energy and resources, squandered by this pointlessly egomaniacal vivocide, into an intuitively intelligent and sustainable (re: vegetarian) approach to being on earth, aligned with source energy, which is the consciousness of the earth. Studies now definitively demonstrate that it is the heartless, mindless exploitation of animals as a food source that is the single greatest contributor to global warming, sea life destruction, and ecological collapse – greater even than transportation or power generation in many areas.

Keep in mind that mankind is not the top of the chain of being in this system of consciousness, the Earth is. As mankind continues to hasten the grievous imbalance of energies through the destruction of earth's natural systems and expressions of it's consciousness, the world will simply adjust to maintain it's harmony. We're not talking about the end of the world. The world will continue on, finding new ways to express divine consciousness, only Man will cease to exist. Wouldn't it be wiser to save our vanishing animal species, and live in a union of biodiversity with them, all contributing to the greater, and to the welfare of our precious Earth?

"I do not see a delegation for the four-footed. I see no seat for the eagles. We forget and we consider ourselves superior, but we are after all a mere part of the Creation...The elements and the animals, and the birds, they live in a state of grace. They are absolute, they can do no wrong. It is only we, the two-leggeds, that can do this. And when we do this to our brothers, then we do the worst in the eyes of the Creator."
Oren Lyons, to the United Nations (1977)

Read about concepts like these and much more in: How to Get to Heaven (Without Really Dying), Wisdom From a Near-Death Survivor  from Llewellyn Worldwide available direct on this page, or online. The first book: How to Survive Life (and Death), A Guide To Happiness In This World and Beyond is available the same ways – but ask for it at your local bookstore!
Posted by robert k. at 9:52 AM 2 comments: