The James Hillman Tribute: To a Life of Passionate Participation 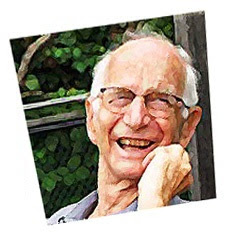 Saturday, May 4th 2013 at the New York Society for Ethical Culture, there was a tribute to my late uncle (by marriage) James Hillman, the preeminent Jungian psychologist and philosopher, presented by his wife Margot McLean. For a man of James' academic stature, you might expect a gathering of global dignitaries and the cream of Higher Education, and there you would not have been disappointed. The surprise came not from who was or wasn't there, but rather from what the participants brought to the occasion.

There were no long-winded inventories of James' accomplishments and awards. Scant mention of his many literary successes, the countless people he had helped through his patient therapeutic practice, or the legions of students he had educated. It wasn't even mentioned that he had served as the Director of the Jung Institute, and that his re-imaginings of Dr. Jung's ideas revolutionized psychology, injected new life into the archetypal mission of the modern gnostic, and reanimated the mystical dance around academia that Dr. Jung himself had struggled with his whole career – these facts were only briefly touched upon.

Instead, during the course of the afternoon, the intellectual feats and rigorous excursions into the human psyche placed second to Uncle Jimmy's demonstrated love of a great joke well told, and his late-in-life devotion to tap dancing – two pursuits possessing the syncopation and joy that arises from the expression of pure being, from a rhythmic persistent and passionate participation in Life. Kla-tappity, tappity, tappity, tap tap! and a beautiful punchline – there it is!  And apparently no one, not even the most elevated academician in attendance, had shown up with anything else in mind other than simply getting right down to the heart of the matter.

Along the way we were given that insight, so precious in any human story, into a childhood and young life, into the struggles and trauma and family dynamics that fashioned the spirit of a man who would spend his life delving into the mysteries of the human psyche; and leaving us to wonder, did he ever understand his own? Can any of us truly know ourselves? What lies at the heart of those shifting, elusive personal motivations that seem to define each of us outwardly?

Our friends, our families, our paths are hewn out of the "stuff that dreams are made of," karmatic partnerships and forgotten agreements – a program for personal evolution hashed out in a dimension that can only be tentatively experienced from this perspective of life.
The testimony, pentimento, and presence of every person there revealed the truth beneath our shared surface in a way that Uncle James, or any other philosopher – or even poet – can only hope to approximate with words. That truth held within the simplest truth of being:  This is all miraculous, and we are all miracles.  Friendship, laughter, and unexpected tap dancing stole the show from academic reason, and instead induced a sense of wonder at the real power that one man's spirit could carry.

Naturally, in a group with the sensibilities you'd expect to come together and celebrate one of the great explorers of the soul, most everyone there was pretty much on the same page. It's a page found fairly deep inside all of our own books, amongst one of many dog-eared pages that we have all read and reread, written and re-written over and over, hoping to get to that heart of the matter ourselves.

But there it was, within that moment together, unmistakably illuminated by the light shining from one elemental man's life:  Beneath the surface of everyone present, from the possessors of all the keys to those who've clearly had to jump out a couple back windows; from the accomplished to the unknown to the silly rich and noble poor – the shiny, the ancient, the aloof and outgoing; under our outfits and hair-dos and don'ts and eyeglasses and shoes, there was what Uncle Jimmy was writing about, what he'd been tap dancing on top of through all those chapters and passages –

When we peel away the skin that forms around this life, that seems to contain and define it and ourselves, we find our greater self – that expansive well we all spring from together. There is the scintillating, effervescent, joyful field of being whose name we come closest to when we call it Love. Everyone everywhere knows it intuitively, but only gets to occupy it on rare occasion. Everyone there knew it and felt it too. This was one such occasion.

A personal hero of mine, Coleman Barks, the poet and translator of the great Sufi poet Rumi, was there, among the many others whose lives are to be celebrated as well. I introduced myself to him, to thank him for the gifts I'd received from his work, at once he said "pull up a chair,"  and immediately it became clear that here was a man whose heart had been permanently pried wide open by the essence of the timeless poetry that he'd been channeling for years.

Mr. Barks and Rumi prove that there are words that can express this invisible thing we share, and I was reminded of a piece of Rumi from his book Feeling the Shoulder of the Lion that describes (with lotus-like architecture similar to that found in the Upanishads) a room within the heart with a window from which one can actually behold The Divine. It is available to all of us, the one requirement being that you have to find your way into that room.

Occupying that precious address requires a persistence and passion great enough to realize the eternal self in all things; a willingness to participate in the constant upheaval and revelation that comes about by living a life worth living, and letting go of it with the kind of grace that Uncle James had. The spirit of all the day's presenters completed the portrait of a man who helps us kick in the door to that room, when we need to; when only breaking in allows us to discover the heart of the matter. Acquiring that view is an inside job indeed.

At the gathering afterwards, I realized that at least for that one moment in our earthly lives, we were all in that room together. It is a very nice view to have shared with such a nice group of people. Thank you James, and thank you Margot, for opening the window for us to look through.

and can be ordered online here. The first book: How to Survive Life (and Death), A Guide To Happiness In This World and Beyond is available everywhere – but ask for them both at your local bookstore!
Posted by robert k. at 1:46 AM No comments: