Love and Rattlesnakes: An Important Message From The [Animal] Kingdom of God 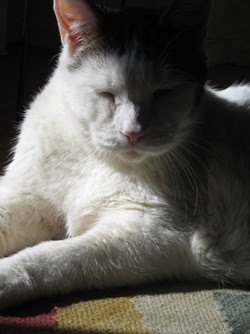 Life can be a lot like juggling cats, very challenging, rather complicated, and a little dangerous. I'm not much of a juggler, but I love cats. (Especially our miracle-cat, Max.) And if you want to grow, you've got to give it your best. It's like that acronym for God – Grow Or Die. It doesn't mean you really die (none of us really do); it means you just never really live.

When I think of human evolution, I think of spiritual evolution. What other kind of evolution is there for us now – the A.I. singularity? Cranial input jacks? Our thumbs getting very pointy from years of texting? That would make picking your nose a lot easier, too.

We say,  "He behaves like an animal,"  when we describe someone who's motivated by ego gratification (unconsciousness) rather than by spiritual growth, but that's got it absolutely backwards. Animals behave just fine on their own. They live in a state of grace in being, in "God's Kingdom." They're constantly showing us how to do it – especially the animals that have grown spiritually alongside each of us, the ones that aid and direct our lives. They are our karma partners.
There was an elderly woman named Dottie, who lived next to us up on the Upper Delaware. She'd spent years and years by the river, and knew that world very well. After her husband died, as her closest companion there was a six-foot black bull snake with whom she shared that stretch of riverbank. It may sound a little strange to you, but it wouldn't at all to an Indian or a mystic. They sat together for years. He was the old woman's protector. One stormy night, I (terrified) had to save him from some deer netting I'd put up myself, and was amazed by his willingness, extraordinary power, and real, pure beauty.

After Dottie passed, a resentful daughter-in-law killed the great snake. Since that day, the area has been visited by increased numbers of timber rattlesnakes, likewise beautiful in their own right, but certainly not cozy compañeros. The men of the area – "real"  men –  beer-drinkin,'  meat-eatin' men who hunt and kill animals just for fun, and because "they like the way they taste," have had a field day killing rattlers since (a crime).

I had to stop such a killing just the other day, and my manly scaredy-pants neighbor said, "Just wait 'til he comes to get you. You saw him ready to strike. He's not your friend, he wants to kill you!" I had to point out to him that he doesn't want to kill you, you want to kill him. Getting ready to strike isn't an attack mode for a rattlesnake, it's a defensive position. Humans have massacred rattlers in numbers that have put them on the Endangered List, not the other way around.

Perhaps I'm preaching to the converted here again, but maybe not when I say this:  Our spiritual evolution requires us to absolutely respect the divinity of all living things. Many of us intuitively glean this lesson from the role our pets play in our lives – that they are our link to The Divine Source of Being, our evolution, if you like. Then we can extend this grace to the animals we unconsciously, indirectly kill and eat; and stop doing that. If we don't, we can only grow so much. Our evolution stagnates, locked in this world of blood and bone and ego.

What difference can it really make in your life, to stop [killing and] eating animals? It's hard to describe exactly, but it's a lot like Love (which is what it is) – you can't put it into words very well, except to say that it's wonderful. It's liberating. It brings presence and meaning to Life in a way that you'd never have imagined it would. It's really living, consciously – and sharing the grace that animals know by nature.

Then we might extend it even further, out past the whales and wild dolphins, the great elephants, and zebras and koalas and all the cute fuzzies, on to all those not-so-cuddlies – like rattlesnakes, and dare I say, even crocodiles. Then we can stop all the needless killing, and begin to live.
My wife is Sue Pike, The Animal Talker®, and yesterday not long after we received the bad news that our eighteen-and-a-half-year-old shaman-cat, Max, has incurable cancer and won't be with us (in this form) much longer, she did a meditation to channel a message from the animals for a radio show she does each month. Maybe you'll forgive my pontificating up to now, because this is the real pay-off to this whole post...it's what the animals said to her:

When you are frustrated, allow and accept our Love. When you are sad, love us. When times are hard, love us. When your heart feels closed, allow and accept our Love.
We're always here for you. Call on us as pets and friends to connect you to The Divine, and allow it. Their Love is pure, learn from it. If no animal is in the household, visit one and feel their Love and connection to The Divine. Then Buffalo came in and said:

No one can topple your authentic self. Remember to be grateful for all that you have.
Goat said: Keep walking step-by-step towards your goals. Love each other on the journey.
Then all the animals said: We are more than our bodies. You are too. Please keep our Earth clean. We love you.
Of course, Max has always said those things to us, he is, after all, a shaman-cat, and our karma partner, now and always. But I imagine that when all the animals say that to us, that includes the rattlesnakes.

"I do not see a delegation for the four-footed. I see no seat for the eagles. We forget and we consider ourselves superior, but we are after all a mere part of the Creation...The elements and the animals, and the birds, they live in a state of grace. They are absolute, they can do no wrong. It is only we, the two-leggeds, that can do this.  And when we do this to our brothers, then we do the worst in the eyes of the Creator."
Oren Lyons, to the United Nations  (1977

Read about this and much more in the new book:which can be purchased on this page or online, along with the first book: How to Survive Life (and Death), A Guide To Happiness In This World and Beyond – or ask for them at your local bookstore!
Posted by rjk at 3:23 PM 2 comments: