How Global Consciousness is Coherently Speaking To Us 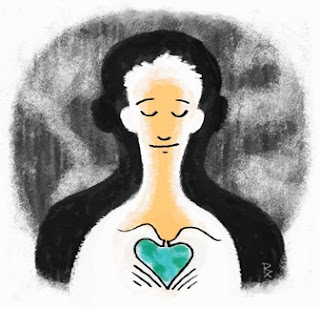 Unfortunately, I'm often a little unconscious, and mildly incoherent – which is no laughing matter, because of all the things I want to experience in my life, consciousness and coherence rank pretty high up there. I prize my moments experiencing consciousness – that feeling of being awake and aware – and recognizing coherence, which in this case doesn't only mean occasionally making sense but refers to a fancier, more scientific way of talking about the profound connection of everything to everything.

Another unfortunate fact is that unconsciousness and incoherence is more or less a default condition for a lot of humanity these days (just look around) – but it needn't be, because true Consciousness (capitalized to emphasize Divinity) is constantly arising, and constantly speaking to us through the forms of coherence we witness around us.

At those times when I can really feel it, when I'm aware and accepting and full of purposeful direction, I feel completely connected – as though I'm being guided by an unseen hand. I understand this as a (momentary) state of my expanded consciousness, when a field of intuitive intelligence is informing my life. Consciousness is speaking to me in a direct, coherent way. It's speaking to me through the coherence that connects all of our existence.
Consciousness is a field that we engage in through the forms we take. Coherence is the connection of every part of those forms to one another through what the Buddhists call emptiness, the Hindu call brahman, and what science nowadays defines as the quantum field.

I happen to be a multiple near-death survivor, and I can tell you that in each of the three occasions while I was “out,” I wasn't really out – I was in deeper. I was still engaged by Consciousness at a very profound level – a level that I recognize is speaking to all of us everyday and in every way through the simple realization of everything being inexorably connected to everything else.

This is the experience of coherence, the fact that every part of me – of my body and mind – from the smallest cell up to my biggest brainstorm are clearly interconnected in a profoundly dynamic way. A flu virus (or a misplaced word) can ruin my entire week, and may simultaneously do the same to millions of other people – as is true for a laugh from a funny Youtube, or the effects of an explosion on the surface of the sun. Every part of me acts inexplicably in concert with every other part of me, as every part of the world (and universe) acts in a dynamic balance, or imbalance, with every other part of the world.

And so it is with the natural interactions we see everywhere – from the clearest examples in Nature of one species dynamically cooperating with another, to the most mysterious and extreme unlikelihood that all the “disconnected” forces alive in the Universe could come together from the vastness of space and somehow create this life on this planet. Stand back and look at our Earth and it's very easy to see that we are part of a coherent whole – a singular expression of an incomprehensible Universal Consciousness. At arms length, our world looks like the same thing (and our arms aren't very long...).

"I am the true Self in the heart of every creature...the beginning, middle, and end of their existence."
The Bhagavad Gita  10.20

Beneath everything lies that unifying intuitive understanding of our truest relationship to the Earth and all the life upon it – an ever-evolving expression of a conscious Universe, being eternally expressed. Quantum coherence and emergent self-organization aren't confined to waves or planets or particles, or only to anthills or flocks of birds either. All the life on Earth is chemically, psychically, and genetically connected at a profound level, at the same level as every other form of life – at the level of survival.

It comes as no shock, does it – that we share enough Consciousness for all of us to know that truth? Our being 'entangled' in non-ordinary ways, sharing a 'non-local' source is obvious in our present contracting reality, and blossoming into global Consciousness through our simultaneous personal realizations.

That's the reason why we can have so much hope – because we can always have faith in the fact that our forms are constantly rediscovering and rearranging "the Self" into a timeless, working whole – even in the face (or in the midst) of our impending catastrophes. Bringing the promise of that faith into reality requires that we follow those natural, intuitive impulses of our own groups, and our own hearts.

The humane acceptance of mass global migrations; racial and sexual equality movements; the impulse to maintain net neutrality; personal participation in clean, free power; a responsible awareness of our changing climate and its effects; respect for our clean water sources; ecological awareness across the generations; a real awareness of global hunger and epidemic disease – all of these are examples of this movement, which is finding its identity in a modern mythology that reconnects us to Mother Earth. A recognition of humanity's spiritual evolution, grounded in altruism, activism, and personal responsibility is bringing us into step with our emergent Global Consciousness, and showing us our true direction. We mustn’t deny it.

"There is a community of the spirit. Join it, and feel the delight of [flying in the noisy flock, and] being the noise...Close both eyes to see with the other eye...Open your hands, if you want to be held...Sit down in this circle."
Rumi

It’s a humble path that leads us towards the shift we all know we must take (those without humility are the cause of our catastrophes). It’s actually an involuntary course we are already taking towards our survival and spiritual evolution. Recognizing it within oneself, and allowing ourselves to join the horizontal hierarchy that this undeniable impulse organizes itself within will guide our best actions.
It's gonna shake things up, alright (whether we want it to or not). It's nothing short of the conscious deconstruction of our systems of exploitative materialism, and the recognition of all the coherent life of the planet as Sacred. This is not just an evolution we’re talking about, but a revolution of humanity – a conscious movement away from the unnecessary waste and destruction we express now, towards the higher order directed by Nature and Consciousness.
And this is not my idea…it's our idea.

"To the knowing, all of life is a movement towards perfection; so what need have they for the excessive, the extravagant, or the extreme?"
Tao te Ching, 29

Read about concepts like these and much more in: How to Get to Heaven (Without Really Dying), Wisdom From a Near-Death Survivor  from Llewellyn Worldwide available direct on this page, or online. The first book: How to Survive Life (and Death), A Guide To Happiness In This World and Beyond is available the same ways – but ask for it at your local bookstore!
Posted by robert k. at 2:24 PM No comments: