A Drop in a Day: How Ego Puts Us on The Little Spot 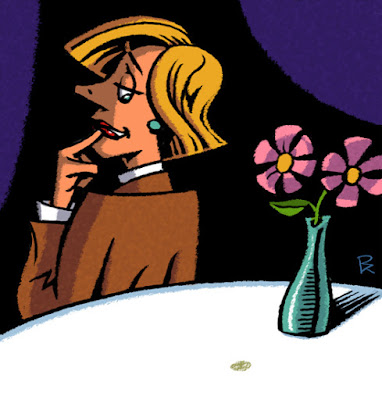 "We are created by our thoughts. We become what we think. Pain and suffering follow negative thoughts like the wheel follows the ox that pulls it."
The Dhammapada, 1: 1

It's crazy what a fussy thing it is to be a human being sometimes. Fussy, itsy-bitsy preoccupations can end up occupying an entire day, or week (or life). Small slip-ups can cascade into torrential hang-ups and unexpectedly put a lock on practically everything, even when it might all be based on nothing, really. Just look at the way we look at things, and wonder why we tend to see them in such an upside-down way…

We're up, awake, and "fully-functioning" for what – about sixteen to eighteen hours a day? The other six or eight we're safely in dreamland. During the course of that sixteen hours of activity, everything usually goes fairly well. Usually. For the most part everything runs pretty smoothly, except for the occasional day when nothing at all seems to go right. (My wife often blames that on "Mercury going retrograde," which doesn't do anything for me, except to get me mad at Mercury–a very hot planet that I barely even know…)
Even then, the problems of a problem-filled day at most add up to just an hour or two of difficulties, if you're really keeping track of it. One-sixteenth of your waking day. Most of the time, the trouble spots we experience are actually very brief – singular sticky moments that pass quickly, but that for some reason we may hold on to and inflate well out of proportion.

It could be one cross look. One misplaced word, or phrase, or gesture. One tiny misunderstanding, or slip, or traffic cross-up, or failure to hear something right, and suddenly it's as if the world got knocked off it's axis. That minor flaw—possibly only two minutes in the whole of our otherwise smooth sixteen-hours—can  take us hostage, eat up all of our mental bandwidth, and demand ownership of the entire day. Just two minutes – out of the one-thousand-four hundred and forty-four in a day.

"The cleaner the tablecloth, the more obvious the spot."

…says my mentor Ray, pointing out that unnecessary obsession with the one itsy-bitsy thing that goes wrong, the one little thing that can throw our entire well-being out of whack. So what's really up with that?

Part of the hardwiring we labor with as humans being human is our vestigial, eternally fearful Ego – the picky, judgmental part of our thinking that still likes to imagine some prehistoric predator is hiding behind every bush. Nothing is ever right for this fuss-bucket from our left brain, constantly pointing out the smallest flaws in an otherwise beautiful finish. Unless we recognize that aggravating inner voice as not being who we want to be, and consciously calling it out, it will happily take ownership of our day in two silly, uncomfortable minutes.
That's the simple mindfulness  required – to become aware of that fearful self-criticism (by default), and reject it! After all, who needs a scold when things are actually going quite well?
The other thing we can do to defuse that out-of-proportion foible is to fix it immediately. Blot out the spot right away! Instantly apologize for the dumb thing you said. Spontaneously extend forgiveness to someone who seems to have slighted you. Brush off the inconsequential objection your fussy Ego wants to stick on your forehead, and...
"FLIP YOUR SCRIPT!"

Instead of letting one wrong minute own your day, take ownership of the fifteen hours and fifty-nine minutes you got right! Be empowered by the fact that you're doing very well, thank you, and you won't need any more help from the self-criticism department. The fact is—you're really on a roll when it comes to living well, and as long as you remember that kindness, honesty, humility, forgiveness, compassion, and service are everybody's friends, you can ignore that little spot on the tablecloth – who cares? It just means you had a nice lunch.

In the bright light of Love, one little spot is nothing...really.

"We are created by our thoughts. We become what we think. Happiness attaches itself like an inseparable shadow to the positive thoughts that precede it."
The Dhammapada, 1: 2

Read about this and much more in:available direct on this page, or online. The first book: How to Survive Life (and Death), A Guide To Happiness In This World and Beyond is available the same ways – but ask for it it at your local bookstore!
Posted by rjk at 12:43 PM 1 comment:

Labels: ego, happiness, How to Get to Heaven (Without Really Dying), love, mindfulness, self-examination, spirituality, The Dhammapada

Thanks to Neil Helm and the Va Beach Chapter for this lecture/book event, and excellent workshop – a beautiful group in a lovely location.

Join me for my lecture on How to Get to Heaven (Without Really Dying) - Registration opens soon! 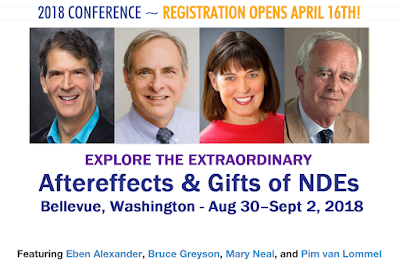 https://conference.iands.org/
Posted by rjk at 11:30 AM No comments: