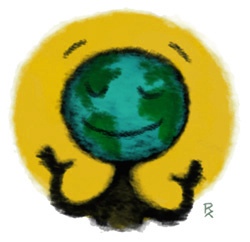 
Back in early 2012, when I wrote this piece, it would have been quite difficult to imagine the situation the world seems to be in now. There were signs of positive change occurring, erupting Consciousness-based movements that appear to have been quashed, and replaced with a kind of hubris that no one expected. How could we be in an "Ethical Era," when when forces of almost inhuman corruption and backward progress seem to be on the ascendancy? Allow me to address these questions in blue...

Remember that poor old evangelist who promised his flock that the world would end soon? He had a lot riding on that prediction, so I couldn't help but feel a little sorry for him when apparently, it didn't happen like he said it would. It didn't happen the way he said it would, but I wonder if it would make him feel any better if he knew that, actually, it did happen. In Dr. J.C. Calleman's interpretation of the Mayan calendar, the world (as we've known it) "ended" with the end of the Universal Underworld in October of 2011, culminating in a state of Trust (or Faith); and an Ethical Era. He was right after all.

May I be the first to make the announcement right here right now? Despite whatever evidence to the contrary, The World, as we have known it, did really end in 2011.
This crazy old world has seen the "end of time," and "the end of the world" so many times now, it seems like it'll never end, and it won't. Of course, it's never actually the end of the world. As George Carlin (the patron saint of cynical enlightenment) said: "It's not the end of the world, it's the end of people. The world will still be here." I expect that at this point of his own spiritual evolution, floating around in another dimension, St. George knows that even that isn't true. Everything, including people, one way or another keeps going along just fine...at least right now.

Actually all of the cartoonishly oppressive reactions we're witnessing now could have been expected, in light of the great energetic transformation that I'm attempting to describe. These are changes that occur on a geological, or in this case, astrological, time table:

What "The End of the World" has always been describing is a psycho-logical end; the re-framing of a new reality brought about by a singular coalescence of transcendent Consciousness; a singularity after which old ways of thinking and doing are in a instant rendered obsolete—like what's happened around here in the last few years. It fits quite nicely into Calleman's Mayan theory, that at some point just after 2011, the Earth be-gan to resonate with a level of Consciousness that simultaneously informed it's occupants that a major change was taking place. Then Spring came early in the Mid East. The "occupiers" showed up. Fraudulent elections became unacceptably obvious. War became obsolete.
Everywhere you go now, people know that the Earth's endless potential is being mismanaged by a criminally unconscious minority (God bless 'em). It's global knowledge that great swaths of humanity are intensely wasteful, while even greater ones are subject to unnecessary deprivation. Our extreme economic disparities are selfishly foolish. The occupants in every small town know about the "elite class" of super-wealthy, extraordinarily fearful (suffering) people, who feel they need to control the world's resources and media, who put "Big Boxes" on the edge of every town. We can see their mess on TV everyday (God bless 'em), and increasingly we live in it, too. The real occupants are aware of what the miraculous potential of the Earth actually can be.

The scramble by those less-evolved humans that base their sense of self on materiality to fearfully consolidate, to drive progress backwards in order to hold on to their "power," only serves to delaminate them from the layer of Conscious Energy that is enfolding the Earth now—a layer crystallized by instantaneous communication, spontaneous Human Compassion on a global scale, and impending environmental disaster. You'e got to "hit bottom" before you can turn your gaze away from the darkness, and head into the light.
The shift I describe into our Era of Ethics is made all the more obvious when the effort involved in propping up all the delusions reaches a stage of silliness that is actually absurd on a psychic level—and downright destructive to humanity in terms of our physical reality.

Naturally it's all happened before, when these literally medieval dis-parities bring us to a spiritual renaissance. It suddenly dawns on us that our need to identify ourselves with the insistent demands of materialism, like "your class," "what you deserve," and "how your way is right," is a form of destructive insanity, forcing us to live the totally inauthentic lives so many of us are all too familiar with. The death of that inauthentic self becomes inevitable. Nothing can ever be the same after that.

Everyone deserves to be who they are. Everyone deserves to be reborn into a fulfilling, authentic life—and they can be, but there almost always seems to be a kind of "Dark Age" first, where "faith is not always a well-lit place." I can't say exactly where we are geologically, at the start of that dark age, in the middle, or towards the end of it, but I do know one thing for certain regarding The End of the World:

Humanity is currently experiencing a mass metaphysical impulse to transcend the delusion of separateness. It's the collective death of an illusion, and it's spreading quickly. The resurrection is arising in Christians; the "Ethical Era" is settling upon the followers of the Mayan Calendar pro-phecy; it's the closing bell of the Kali Yuga to Hindus.
As a global entity, we all recognize the unfathomable mystery that everything comes from somewhere and goes somewhere, to a kind of ultimate ground of being that we're becoming aware of through quantum physics, cyber-consciousness, and verifiable sixth-sensory perception. We know that mysterious ground of being transcends this form we're in; that this "radiance of the eternal" penetrates everything and everybody, intuitively informing a graceful and responsible way to live that's possible for everyone, and that everyone in the world deserves as their birthright.
That radiance, that understanding we all share illuminates the dark place where we find trust in ourselves and each other—it's the power of our Faith. That is the light we can shine now to penetrate our media, our destructive mass-ego, our "One Percent," to penetrate through back to the ground of our mystery.

The tall, broad shadow of a new reality, determined by Ethical Compassion, casts its shadow over the merchants of fear. The going may get tough as the proponents of delusional "control" and "power" cling to their shallow self-worth in the face of their self-inflicted environmental collapse, and transcendent spiritual realization on a truly global level. All species transform in the direction of their common survival — that is the remarkable beauty taking place on our planet right now.

Now we can stand our ethical ground with an unassailable authority; the boundaries protecting humanity simply can no longer be contested; and if you stop for a moment, and just listen...you can own it. You won't need to fight in the streets, if that's not your karma. You won't need to be consumed by the energy of fear, in fact, choose the opposite direction. Seek out Love and compassionate, humane fellowship. Be of service to the larger cause, in any way you can.

The best and easiest way to make all this happen is to simply show up for life with this knowledge in our hearts, and try our best to live our authentic lives—where the inspiration for our actions comes from the inside, not the outside. That's a nice metaphysical impulse to answer, isn't it?
It's even mystical...

Here's the good news: The old world has ended. Welcome to the new world.

Read about this and much more in: How to Get to Heaven (Without Really Dying), Wisdom From a Near-Death Survivor  from Llewellyn Worldwide available direct on this page, or online. How to Survive Life (and Death), A Guide To Happiness In This World and Beyond is available the same ways – but ask for it at your local bookstore!
Posted by robert k. at 9:05 AM 1 comment: