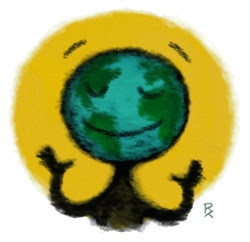 Remember all those poor old evangelists who promised the end of the world? They all had a lot riding on that prediction, so you can't help but feel a little sorry for them when it didn't happen when and how they said it was going to. But then perhaps it did happen – it is happening, just not the way they thought it would.

May I be the first to bring you the real good news right here and right now? Despite whatever evidence to the contrary, The World – as we have known it – has ended.
It's been the "end of time," and "the end of the world" so many times now, it seems like it never will really end, and it won't. Of course, it's never actually the end of the world we're talking about. As George Carlin (the patron saint of cynical enlightenment) said: "It's not the end of the world, it's the end of people, man. The world is still gonna be here – we aren't."

The end of the world hasn't come the way we usually think of it, because the classical "End of the World" doesn't describe a literal ending; like all scriptural spiritual scenarios it's really a metaphor. "The End of the World" is really a spiritual and psychological end – the reframing of a new reality brought about by a big change: a transformational coalescence of consciousness, a "singularity" after which old ways of thinking and doing are in an instant rendered obsolete. Sound familiar? It is a lot like what's been happening around here lately.
It even fits quite nicely into that Mayan theory that around 2012 the Earth began to resonate with a level of consciousness that simultaneously threw things into a kind of chaos, and seriously began to inform it's occupants that a major change was taking place. The "occupiers" showed up in town squares, the "Arab Spring" took place. Hong Kong began to percolate. Fraudulent elections became unacceptably obvious, and their results provoked the most massive global protests ever known. War became obsolete (but it's chief proponents will never admit it). Now pandemic is defining the falsehoods of financial structures, the equivalent needs of all people – and the grotesque inequalities forced onto humanity by unconscious folly, greed, and self-worship. A revolution has erupted against the "Era of Power" that supports itself on lies and hatred. Climate change attests to the truth that what we do has consequences – that we can cause irreversible destruction to this beautiful world.
And all the while, arising awareness and Love demonstrates the solutions presented to us by spiritual sanity. We are all one.

Wherever you're at home now, everyone is learning that the Earth's endless potential is being mismanaged by a criminally unconscious minority (God bless 'em). It's global knowledge that misguided, destructive segments of humanity are intensely wasteful, while the majority of our brother and sister humans are subject to unnecessary want and deprivation. It's clear that our extreme economic disparities are selfishly foolish and completely unsustainable. The occupants in every small town know about the elite class of super-wealthy, extraordinarily fearful (suffering) people, who feel they need to control the world's resources and media (the true "Fake Media"); corporate agents who are happy to kill off every Mom & Pop business in the world, and control all consumption from soulless global distribution centers. We can see their duplicity and their political mess on TV everyday, and increasingly we are living in it, too.
Yet the true, vast majority of real earthly occupants are aware of what the miraculous potential of the Earth actually is.

Naturally it's all happened before, when these literally medieval disparities bring us to a spiritual renaissance. We suddenly realize that being programmed to identify ourselves with the insane demands of corporate materialism, like "trickle-down," "know your class," "what you deserve and must have," and "how our way is right," is a form of destructive insanity that's forcing us to live totally inauthentic lives. The death of that inauthentic self becomes inevitable, and that's the shift – "The End of the World." Nothing can ever be the same after that.

Here's what it means: Everyone deserves to be who they are. Everyone deserves to be reborn into a fulfilling, authentic life. Everyone deserves life, health, and sufficient wealth – the shared resources of this incredibly abundant planet. We will have that, but there almost always seems to be a kind of "Dark Age" first, where faith is not always a well-lit place. It's like that period inside the caterpillar's chrysalis that is pure chaos, before the formation and flight of a new Era of Ethics.
I can't say exactly where we are in the process – at the start of that dark age, in the middle, or towards the end of it – whether we've stopped crawling and are growing our wings...but I do know one thing for certain regarding "The End of the World:"

Humanity is currently experiencing a mass metaphysical impulse to transcend the delusion of separateness. It's the collective death of an illusion, and it's spreading faster and more completely than any virus ever could. The resurrection is arising; the "Ethical Era" is settling upon the followers of the one true prophecy: That all Life on Earth is beginning to realize that it is one in the same thing. The Earth already knows, the animals do too – it's just people that are a little late to the real party.

As that global entity, we can all recognize the unfathomable mystery that everything comes from somewhere and goes somewhere, to a kind of ultimate ground of being that we're becoming aware of through quantum physics, cyber-consciousness, and verifiable sixth-sensory perception. We know that a mysterious ground of being – a 'matrix' of loving intelligence – transcends this form we're in; that this "radiance of the eternal" penetrates everything and everybody, and is intuitively informing a graceful and responsible way to live that's possible for everyone, and that everyone in this world deserves as their birthright. The darkness just requires deconstructing first.

Then the "radiance" (that understanding we all share) can illuminate the dark place where we'll find trust in ourselves and each other – call it Faith. That is the light we can shine now to penetrate our media, our destructive mass-ego, our "One Percent," and expose it – penetrate through it back to the fundamental mystery where we all live free and equal lives.
Now we can stand our ethical ground with an unassailable authority; the boundaries protecting humanity simply can no longer be contested; and if you stop for a moment, and just listen and feel, it is yours to occupy.

The best and easiest way to make all this happen is to simply show up for life with this knowledge in our hearts, and try our best to live our authentic lives – where the inspiration for our actions comes from the inside, not the outside. We're being taught the difference between what is really important, and what is completely unnecessary and destructive – just pay attention and follow that direction!

And here is the good news, here is the real gospel – the world has ended. Welcome to the new world.

Read about this and much more in:available direct on this page, or online. The first book: How to Survive Life (and Death), A Guide To Happiness In This World and Beyond is available the same ways – but ask for it it at your local bookstore!
Posted by robert k. at 4:51 PM 1 comment: