"How to Survive Life (and Death)" with Robert Kopecky, Namaste Bookshop, NYC
From this three time 'Near Death Experiencer," an introduction and reading of his lively, well-received...
Posted by rjk at 5:18 PM No comments:

An International Association of Near Death Studies (IANDS) Interview

"Believe me, it was worth the wait. Reading it reminded me of nothing less that Ram Dass' famous book "Be Here Now," but without all the references to LSD." Lee Witting, International Association of Near Death Studies.
Listen to Lee's excellent interview, on Talkzone: How To Survive Life And Death, A Guide to Happiness in This World and Beyond, #NDE Radio

Talkzone: How To Survive Life And Death
www.talkzone.com
Author Robert Kopecky shares his three unique near death experiences
Posted by robert k. at 8:18 AM No comments:

Flocks, Schools, and Spiritual Evolution (It's a Revolution) 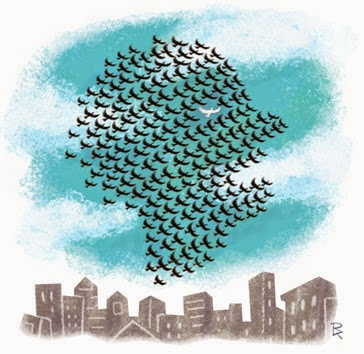 Have you ever looked up in the sky and seen a flock of birds in flight, undulating as though they were a single living organism? Separate yet solid. Shifting fluidly, like  living expressions inside of a dynamically divine Lava Lamp.

There's something fascinating going on there that we all recognize from way down in our subliminal cellars clear up to our archetypal attics – a cooperative organization and movement, issuing from an invisible intelligence. Science has its explanations for these orders and arrangements of the natural world, but their explanations are always an effort to frame the miraculous and justify a sense of understanding and control over something that's far more beautiful to witness than it could ever be to explain.

Beneath it all though, lies that unifying intuitive understanding of our basic natural relationship to the Earth; an ever-evolving expression, being eternally expressed. We, like those birds, are doing it too. That's the reason why, even in the face of our impending catastrophe, we have so much hope–because we can always have faith in the fact that our forms are constantly rediscovering and rearranging the Self into a timeless, working whole. (Ours is the only design that isn't intelligent). But bringing the promise of that faith into reality, requires that we follow those natural, intuitive impulses of our own group.

Quantum coherence and emergent self-organization aren't confined to particles or waves, or to anthills either. Nor are they unrelated to 'magic,' or the miraculous – they're just more finely drawn evidence of it. We are all psychically connected at a profound level–at least the level of survival. That comes as no shock, does it? We're sharing enough consciousness for to all of us to know that truth. Our being 'entangled' in non-ordinary ways, sharing a 'non-local' source, and joined by an "acausal connecting principle" is obvious in our contracting reality – blossoming into global consciousness through our simultaneous personal realizations. A collective déjà vu of growing intensity. We have had to change this way before.

Those entrancing performances of flocking birds and schooling fish illustrate our own emergent human properties–not just as strategies for survival, but for our physical and spiritual evolution as well. The energy that animates those collective expressions of divine purpose – to move beautifully and harmoniously as one – insists that we now embrace our collective intelligence, and change course.

Occupation movements; the impulse to maintain internet neutrality; personal participation in the power grid; rapidly deepening ecological awareness across the generations are all examples of this movement, which, out of the mainstream, finds its  identity in a kind of modern shamanic mythology that seeks to reconnect us to Mother Earth. In our mainstream culture, it's expressed as the profoundly progressive consciousness that elected the first African-American president, or that embraces the full rights of all sexual orientations. It's a recognition of humanity – grounded in altruism, activism, spiritual evolution, and personal responsibility.

Who leads this flock of birds? Where does the order to form this expression come from? The order to behave sensibly, as birds should; to cohere to the greater energies at play in the Universe, and within each and every individual? Simply put, it's beyond us, and between us. Recognizing it within oneself, and allowing ourselves to belong to the horizontal hierarchy that this undeniable impulse organizes itself within, brings us into balance with our emergent global consciousness, and gives us our true direction.

"There is a community of the spirit. Join it, and feel the delight of [flying in the noisy flock, and] being the noise...Close both eyes to see with the other eye...Open your hands, if you want to be held...Sit down in this circle."
Rumi

These emergent qualities we share are finding a rising media voice too – from the comforting spirituality of Oprah, the late Louise Hay and Wayne Dyer; to the (more 'serious') science-based ideas of Ray Kurzweil or Bruce Lipton; to the 'in-your-face' progressive moxie of Russell Brand and Daniel Pinchbeck. All of these voices represent our intuitively shifting dynamic, which is totally at odds with the destructive financial elite – stuck in it's cultural amber – that's leading us in a top-down line to global disaster.

What are our means to directly access and join this collective shift? Well, we each carry those means in our willingness to participate with humility and honesty; in the Love alive in our hearts.

Nowhere have I found a guide for following this calling, in a totally practical way, expressed as wonderfully as in the brilliant Ervin Laszlo's "Ten Commandments of a Timely Vision" (from Quantum Shift in the Global Brain, Inner Traditions, 2008). It's a beautifully usable template, which (with apologies to Mr. Laszlo) I'll try to synopsize for the sake of brevity:

1. Live in ways that enable others to live, without detracting from their chances.

2. Live in ways that respect the [absolute] right to life and economic and cultural development of all people.

3. Live in ways that safeguard the intrinsic right to life and a supportive environment.

4. Pursue happiness, freedom, and fulfillment in harmony with nature, and with consideration for others.

5. Require that your government relates to all peoples peacefully, and in a spirit of healthy cooperation.

6. Require your enterprises to accept responsibility for their effect on markets and environments, free from exploitative intentions.

8. Help those less privileged to live a life of dignity.

10. Work with like-minded people to to preserve, restore, and maintain the balance of your neighborhood, country, and global biosphere.

Here then is the path–drawn-out–towards the great shift we all know we must take; the practically involuntary course we are already taking towards our survival and spiritual evolution. It's nothing short of the conscious suppression of the destructive values of materialism, and the recognition of all life of the planet as sacred. It isn't just an evolution I'm talking about, but will have to be a revolution of humanity, from the unnecessary waste and despair we experience now, towards its highest order.

So, for what it's worth (humbly and honestly), I too am following the indescribable urge that's calling for revolution–a recognition of our spiritual nature; and the requirement that a just and humane respect be shown to the Earth and all it's occupants, enforced by whatever means our Intelligent Design determines us to follow...and it's not even my idea at all.

"To the knowing, all of life is a movement towards perfection; so what need have they for the excessive, the extravagant, or the extreme?"
Tao te Ching, 29

Read about this and much more in:available direct on this page, or online. The first book: How to Survive Life (and Death), A Guide To Happiness In This World and Beyond is available the same ways – but ask for it it at your local bookstore!