The Paradox of Surrender–When "Losers" Are Winners 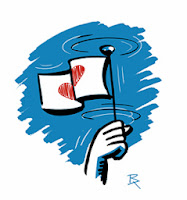 The concept of surrender, as we usually think of it, never sounds too agree-able. In fact, It sounds like something to be assiduously avoided. So the suggestion that surrender is really a strategy for gaining a very high order of success seems counterintuitive, to say the least. It sounds as though it may be a justification for under achievers and capitulators. A losers cop-out. But that isn't surrender in the same sense as I'm suggesting.

To start, let's look at surrender in a different context than as a defeat and painful submission: When everything is going really well, when you're on top of everything, you're not fighting life. You're not having to work at it too hard, not trying to force life to go your way. Why would you? It's already going just fine just the way it is. You're riding on top of the flow of Life, so to speak. You are also completely and happily surrendered.

We don't usually think of it in this way, because the human ego insistently attaches negative comparisons to what turn out to be positive experiences. For example we're more likely to think "he failed to be promoted at his job," than "he wasn't saddled with that high-pressure job, so he was available for something better when it came along." We may be jumping to a negative conclusion, when he was really lucky to have missed out on that promotion. But when things are going well, we're not attaching any negativity to our ride. We're lucky to be completely surrendered to Life, and much less likely to botch up a good thing.

Surrender in this sense isn't a capitulation to a lesser outcome, or a submission to injustice. It's a positive action that you can take. By surrendering to the direction your intuitive intelligence is sending you in, by being true to yourself, you can do the right thing without fear. You can stand up to the bully, or the unconscious exploiter with the knowledge that the power of the Universe is supporting you. You're not giving into evil. Just the opposite, in fact. You are naturally elevated above it.

That amazing metaphoric adventure of Hindu mythology, The Bhagavad Gita, explains this distinction in its typically engaging way. The great warrior Arjuna doesn't want to go to war against the armies of his blind, ambitious uncle – against his own cousins, his own family. Capitulation seems almost to be a preferable option. But his chariot driver, who happens to be Krishna (God), tells him that he must surrender to his purpose in life. To be a great warrior, and to oppose injustice and oppression, especially if it comes from parts of himself. Arjuna only need do his best, the greater forces of the Universe will determine the outcome. Of course, good prevails. Surrender is a strategy for winning– for joining your self to the winning side.

This is the answer, the surrender to the metaphysical impulse to transcend the sense of fearful separation from the magical wonder of the world. The answer to finding your true path. Have no fear as to the outcome, just do what your heart tells you is true. Don't force anything, but release into the power and flow of Life. You have to give it up to get it.

The teacher Yeshua suggests over and over that we be like infants. And what form have we ever known that is  more in a state of surrender than our infancy was? Without the separation from the divine that an adult ego insists upon, we are carried through life securely and magically, through no effort on our own part other than simply being. You don't want to act like a baby, but you don't want to act like what's typically thought of as being "grown-up." Serious, controlled. The "master" of your own fate. Surrender to your playful, childlike side; to your curiosity, and humble willingness.

Stay in the source. Surrender to the simple connection that carries you to your greatest potential. Exile your ego. Take that action––the direction of intuitive intelligence, and when it comes to figuring everything out, just give it up!