Tales of the Koko Lion Part 9: Fellini, Into the Light 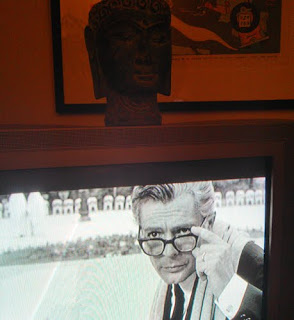 "Life can only be understood backwards, but it must be lived forwards."
Soren Kierkegaard

San Diego in the late Fifties and early Sixties could've been defined in a number of ways. As a border town. As a Navy town. As beta suburbia. Growing up I was saved, in part, from the delusional mindscape of nascent American TV by the more realistic attitudes and practices of our next-door neighbor to the south, Mexico. Like the wonderfully defiant listening alternative provided to the U.S. southwest by "Border Radio," there were also TV stations just over the frontera that transmitted a whole different kind of programming (than what the 3 networks had to offer) right into our uptight family rooms, with enough power to curl the FCC's hair.

There was a real variety of shows offered, many of which, thank God, side-stepped the standards of decent American programming. Wrestlers, sombrero westerns, bullfights, silly sexy skit shows. For me, as a twelve-year-old, the most anticipated of these programs was, naturally, the most potentially corrupting.
Late at night while the decent folk slept, XETV, Canal Seis en Tijuana, aired racey foreign movies. Uncensored european, and especially Italian movies. Some of which were especially Italian. Those were the ones I liked best. At six, I'd been caught in a closet with an early Playboy magazine and a flashlight, presumably looking for something that I was not going to find in those dirty, wholesome pages.

On weekends, I was baby-sat by the sword-and-sandal triple-features at the local movie palace, or on Saturday mornings at home right after the beauty of the Warner Brothers Cartoon block, I could tune into such amazing prepubescent psyche-shaping Technicolor extravaganzas as "Hercules Versus the Leopard Women," and watch the dubbed-into-english english-speaking Steve Reeves impose his well-oiled torso on a mysterious ancient sect of zippered-bodice amazons ( God bless you, Joseph E. Levine). Steve made heroic pronouncements out-of-sync while holding plaster columns over head, or while tossing aside paper maché boulders like paper maché. The Leopard Women were ultra-alluring in their panty hose of antiquity, their vibrant lips glistening; their majestic mascara-ed eyes flapping like teal-winged peacocks.
But this was nothing compared to the surreptitious promise of the middle-of-the-night movies, where the themes were decidedly more surrealistically adult. Like the thrill of seeing the original brassiere machine gun deployed by the ravishing Ursula Andress in the pre-feminist Sci-Fi classic, "The Tenth Victim." Or the barely night-gowned Barbara Steele wandering the darkened castle grounds, stirring up mayhem and pre-adolescent libidos in "Black Friday."

You never know the package a life-lesson will come in.  Very late one night, when everyone was asleep, my paper-route alarm clock went off on low at five minutes to two. I crept upstairs and positioned myself no more than fourteen inches from the Zenith color TV, quietly popping on the tube to the promise of secret and forbidden content suggested by the night's listing of an especially Italian, decidedly adult film, La Dolce Vita. Somewhere, I'd seen the poster image of an abundant Anita Ekberg dancing in a fountain. The screen lit up with the double masks of Janus. Then something completely unexpected happened. 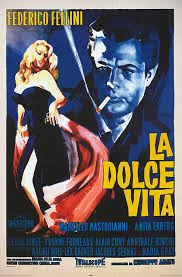 Yes, there were titillations. There were situations that excited me that I didn't really understand. But there was something else that I'd never felt before – an agitation and satisfaction of the most profound nature. I sat, glued by the magnetic blue glow of the screen, and spent that whole evening immersed in a separate reality, accompanying Marcello along the meridians of Rome, and deep into the passages of this attractive, anti-heroic, strangely familiar man's life. His tentative and mysterious relationship to women. The absurd humanity at the media event of the children witnessing The Virgin. The sophisticated cocktail party at his urbane mentor's moderne flat (I wanted to be at that elevated cocktail party for years after that). The heartbreak of a "wild" night on the town with his fading father. The collapse of his spirit in the shadow of a tawdry sexcapade.

It was storytelling of a prophetic nature for me, for while I'd never grasped the metaphoric significance of St. George and the Dragon, or the Labors of Hercules – my boyhood tales – here at last was an attractively disaffected mythology that I could base my approaching adulthood on. A night in existential armor. It felt like the story of what I was going to become, and I would go on to live my own version of that story. In a way, a small part of me is still living it.

Three-and-a-half hours later, the sun rose over San Diego, as it arose on Marcello's Roma in the film. I turned the TV off, and crept back downstairs, but Fellini's carnival collision of human motivations that I'd witnessed grew me up in a way that no superficial guidance from parents or teachers ever could.

My mother didn't understand why suddenly at age twelve, I kept pestering her to drive me to the art house theaters out by the beach every time they showed a Fellini film.
"Why would you want me to take you all the way out there to see one of those weird Italian movies?"

Mama mia!  Because in my life, in La Dolce Vita, I had discovered art, and art is living the life within you.

"What we call fate does not come to us from outside: it goes forth from within us."
Rainer Maria Rilke

Read about this and much more in:available direct or online. The first book: How to Survive Life (and Death), A Guide To Happiness In This World and Beyond is available the same ways – but ask for it it at your local bookstore!
Posted by rjk at 8:24 AM