Jesus Was a Buddhist: Resurrecting the Bodhisattva

When this was first posted on Evolver.net it raised a few hackles...but what is a hackle anyways? As long as it inspires some thought, I'm happy. 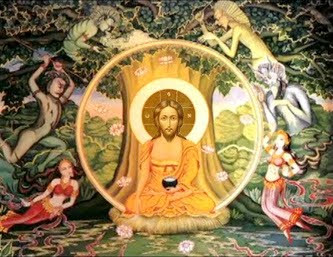 Easter is always a good time to consider what "resurrection" actually entails – what it is we might have really found, or lost. Institutional Christian mythology began as a function of veiled political intentions, created to control people at the level of their deepest needs and potential. Understanding that Christianity may actually derive it's moral center from Yoga and Buddhism, and that – very possibly –Jesus was a Buddhist, sets us free to celebrate a different way...to resurrect the bodhisattva. After all, he'll always come back to help us.

Denial is accepting ignorance as truth through force of will.

Where you find truth, Love, and compassion you'll find spiritual healing and evolution – that's how contemporary Christianity (all religion, really) can, and does work. Faith, honesty, compassionate kindness, and devotional intention is far more powerful than any single scripture, dogma, or mythological narrative; it simply is much of the message metaphorically concealed in nearly every myth, of every age and origin. The adherence to Christian myth as literal truth (as history), while inaccurate, works for many because as the Vedas, the Bhadavad Gita, then Proverbs, then The Buddha have all said (to paraphrase) "As a man thinks, so he is."
Where conflict arises in any entity, as it always has through the extraordinarily violent history of Christianity, we have to look to the origin, the psychic source of the trouble. In the case of canonical Christianity, problems may be found in the motives of its beginnings. A false motive at it's heart may continue to manifest itself in duplicitous ways – counter to what it's enlightened inspiration would suggest – namely as the fear, judgment, false entitlement, and self-righteous-ness that comes from living in denial.

"No matter what a man does, whether his deeds serve virtue or vice, nothing lacks importance. All actions bear a kind of fruit."
The Buddha, Udanavarga 8: 9

Institutional Christianity (and a lot of "Historical Jesus" academic and popular writing) would have us believe that the Christ story arose in a vacuum – that nothing significant existed before or after it. Of course that's not at all true. The Mediterranean Mideast into Asia was an incubator of spiritual beliefs for thousands of years prior to the Christian Era, and the mythologies of the Virgin Birth, divine personifications, the Passion Play, et al, were repeated over and over, over the centuries. Krishna, Mitra, Zoroaster, Horus – examples of the divine force personified go on and on. Trade and commerce, and the Roman Empire united a tangle of fabricated mythologies, all pointing to our mysterious union, and all made subject to political exploitation.
The authors of the Christian canons weren't indigenous "fishers of men," they were journeyman writers – specialists at a time when literacy was rare – surrounded by references and research which they were engaged to craft and edit into a religiously (and politically) viable mythology. After their work supported the authorization of a Christian hierarchy (by God himself, no less), the real roots of Christian principle were [violently] suppressed – right up until the discoveries at Nag Hammadi, in 1945, cracked open the centuries-long conspiracy.
We see the same mechanism at work in our present day in the examples of Mormonism and Scientology, both of which were likely the fabrications of deeply flawed people (God bless 'em), edited, amended, and augmented to make sense – and both of which now can legitimately claim millions of devoted adherents, many of whom have greatly benefitted by their beliefs. The truths at the heart of our shared mystery arise from our own conversion experiences. From our own personal spiritual rebirths.

The real origins of many Christian principles arrived with the transmittal of spiritual teachings out of the Gandhara region of India along trade routes to points west; Yogic (Vedic) knowledge probably very early on (4 to 5 thousand years ago), but in particular and most definitively after the age of Buddha. Almost three hundred years before the Christian Era, an Indian king named Asoka experienced a powerful conversion to Buddhism, and was struck with a determined and well-financed missionary zeal. He sent Theravedic Buddhist monks to every corner of the known world of trade, including to the Lake Mareotis area near Alexandria.
Did you know that The Buddha was born of a virgin, attained "christhood" sitting alone after being tempted by "the devil," walked on water, fed the multitudes from a single basket, and otherwise [was] copied [by] Jesus in dozens of ways? The following question and answer partly illustrates the spirit that moved from the Buddha into Jesus (keeping in mind that the answer came about five hundred years before the question); but there are easily dozens of such direct attributions that can be made when borrowing The Buddha (the "enlightened one") to build The Christ (the "anointed one"):

Q: "How is it that thou, being a Jew, askest drink of me, which am a woman of Samaria? for the Jews have no dealings with the Samaritans."
John 4:9

A: "My sister, I am not asking about your caste or your family; I am asking whether you can give me some water to drink."
The Buddha, Divyavadana 217

Through Buddhist monks in and near Alexandria, the teachings of the Buddha were widely disseminated throughout the pre-Christian world, and as the historical person behind Jesus – Yeshua – was most likely an Essene Hebrew, it's very possible that he had been influenced, or taught directly by that Egyptian branch of Essenes known as Theraputae (from Theravada – "Teachings of the Old Ones," to Theraputta – "Sons of the Old Ones"). The Theraputae were Buddhist "Hebrews," categorized as Essenes, whose principles are more or less exactly those proscribed by Christianity hundreds of years before Christianity was formalized. (Note: there seems to be a continuing effort to pidgeonhole all Essene practice as that which was common to the branch found in Qumran – a curiously strict redefinition).

In no way do I mean to impugn the intentions at the heart of Christian principles, or the boundless eternal spirit of Yeshua – to the contrary, only to point out that the way towards buddhahood for the bodhisattva (the enlightened being who compassionately renounces Nirvana to return on behalf of the suffering) lies in the practice of generosity, morality, patience, energy, meditation, and wisdom.... Liberally mix that with Love; and with Right Understanding, Right Purpose, Right Speech, Right Action, Right Occupation, Right Effort, Right Mindfulness, and Right Meditation, and you will be on that path of spiritual evolution yourself.

"Whoever drinks from my mouth will become like me and I will become them, and what was hidden from them will be revealed."
Yeshua, The Gospel of Thomas, 108


The new book:can be ordered online. The first book: How to Survive Life (and Death), A Guide To Happiness In This World and Beyond is available everywhere – but ask for them both at your local bookstore!
Posted by rjk at 1:13 PM