Once you were out past Los Feliz, past Atwater, it was best to stay off that narrow little old Pasadena Freeway with it's non-existant on-ramps, and head right on up into Highland Park, if you could find your way. Out there on the other side of the Golden State Freeway, the roads trickle and spill uphill into the landscape you can see from Chavez Ravine, from the cheap seats at Dodger Stadium. This was really a lot like the canyonland I came from, the winding roads up to the little hilltops like where the Bobos' house sat, at the back of a circular driveway on top of it's own little hill near Mt. Washington. It was one of those white ranch-styles. White, glittery rock halfway up the sides to white painted frame and windows with white wooden blinds. White crushed rock in the planters. White trim and a black door, with a withered wreath on it, and a WELCOME mat.
I nervously rang the bell, and Mrs. Bobo nervously answered, holding her other hand like she had a lit cigarette in it. She was a small black woman, mid-sixties-ish, delicate, wearing large-framed glasses and dressed comfortably in slacks and a shirt, with a scarf tied around her hair, over her head. She asked me in and sat me in the white living room, white walls, white furniture, a cherry wood bowl full of large, white marble grapes. I felt like an interloper right away, like I had no right to be there.
There was a palpable energy of injury in the air, and she immediately began talking to me—rather out of context it seemed—about things I didn't understand, things that I knew weren't any of my business. My God, I realized, this woman's husband has just died and she's in terrible pain. I tried to be as agreeable as I could be, sipping the coffee she'd offered me, and uncomfortably agreeing with her about everything she said.

She was making me look underneath, you know—under the cover of her life—the thirty or forty years she'd spent married to a traveling latin jazz star. I wasn't at all ready for it, for the intimacy, for the exclusivity. She looked steady into my eyes and spoke like I knew just what she was talking about—like she was telling me something as familiar to me as it was to her. And then I began to believe that it was familiar, looking into that particular wound, and that this was a private disclosure meant only for the two of us and the commensurate spirits there in the room with us.
I uneasily assumed some of her injury as we shuffled through the box of photos, a box full of their life. She stopped to tell each of the stories accompanying the shiny, curling black and white photos and faded kodachromes, few of which would serve my actual purpose for being there. Blurry moments at sunny cafés. Hasty group shots at family occasions. Party goers mid-conversation. And then I realized, this was my purpose, to be present as she made her careful in-ventory, before she could put the box away.
I picked out a few photographs that might work, but not very well—my original intentions had been gently taken hostage by sharing the trauma of this stranger who sat before me, her hands quietly shaking. Now she seemed to be speaking in directions where I didn't belong, that I didn't understand, about how none of it was right, how all of it was such a shame, how a boy ought to respect his mother.
"He never showed her the proper respect...he never did!" She said, and I realized that it wasn't her dead husband she was talking about anymore, or was it? "She's my best friend, you know...we've been best friends for years," she said, "Mrs. Gaye...I was over there last night, you know. Lord, such a sad, sad thing. Such a shame for a boy to do that." Like I knew... 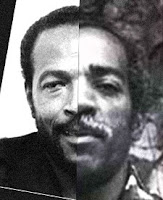 It was April 3rd, 1984, and I remembered that just two days before, Marvin Gaye's father, the elder Mr. Marvin Gaye, Sr., had shot and killed his son, the iconic soul singer whose voice had played such an important part of a lot of our lives, and whose "What's Going On?" album was the smooth, profound soundtrack of a country's wounded soul. Drugs and alcohol and ego were the drivers of this tragedy, like they were for so many. Mrs. Bobo and Mrs. Gaye were the very best of friends, and had been for years, and suddenly the true size and shape of that wound I'd been witnessing became clear to me... Can I Get a Witness?
"He should have shown her the proper respect," she said, as she led me back out to the door, and sent me back down the drive, back down the little road wrapping around the hill, spilling me out onto San Fernando Road, past the Eagle Rock turn, past Forest Lawn, and on up the valley towards home.

The portrait didn't come out all that well—it was sufficient I suppose. Colorful and certainly accurate, but not one of my best. The program was printed, the festival happened, and finally one day I called to check Mrs. Bobo's address, to send back the pictures, and to see if she'd like the original painting I'd done, as a gift.
"That picture was the worst thing I ever saw," she said on the phone. "No thank you—I do not want it. It looked nothing at all like my Willie. Just send me back my pictures." So that's what I did.

It had really just been on account of one phone call, that day in L.A. Just a little ride to the edge of the box, and a peek underneath it's lid.