Tales of the Koko Lion, Part 26: The Road to Chetumal; Entering the Underworld 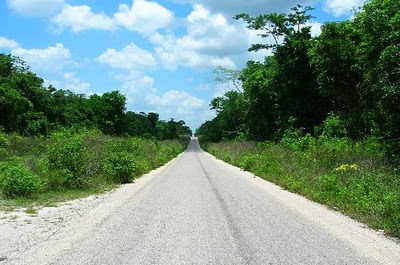 The fat, brown old '75 Chrysler that they'd rent-a-wrecked next to the airport in Cancun hovered down the road across the peninsula, from Escarcega to Chetumal, sucking up the pale, gravelly length of it. The highway seemed to extrude endlessly from a vanishing point ahead, as though oozing from an ever-retreating pipe, pulling them towards the Carribean, the low jungle creeping in along each shoulder. They weren't at all lost, they just felt like it.

It was probably because it seemed such a long ride, this second leg of the three; out past Valladolid to Merida, down to Campeche and Champoton having been the first part; now from the western blue water side to the azure east coast and the border with Belize. All he heard was wind with all the windows rolled down (the old school air conditioning), and everyone was asleep it seemed, even Koko, though he may have been driving – he couldn't say for sure. The twilight colors of the zocalo in Merida seemed so long ago, and since that silly light show in Chichen Itza they'd been sent off into their alternate world of tourism alive in the Yucatan wild.
They'd all caught that strange fever, as though drinking from the first bottomless cenote had laid out a subterranean map to follow, from ruin to ruin searching out jaguars, ufos, and entrances to the underworld. They were all there, holes in the sky and the earth, they just had to find them. Intuitively, they knew the underworld stood in for their own interior landscapes, though as usual it was never dis-cussed. The lush but arid overgrowth invading every road and each moment of life on the surface betrayed those deceptions so typically found in "paradise" – a little like the appearances of their own exteriors, flowered and casual.

On either side of the highway they saw the occasional mud hut, but never any people. "There's a smart one!" Jean would say each time they passed a mottled, meatless pig by the road. It was an ongoing bit of sarcastic fun, in response to Koko having told her about an article he'd read that mentioned how truly intelligent pigs were. It got a laugh every time in those days, when they were all asleep and still mistaking sarcasm for humor.

Any hand-scrawled sign on a dirt turn-off promising a ruin or an entrance to the underworld de-manded a requisite exploration, observed overhead by invisibly vi-brating alien spacecraft and lan-guid jaguars in the underbrush.
No stone in that respect could be left unturned, and so he'd swung the old boat down a wide dirt path and followed it to where an elderly yucateco and a dirty little boy loosely held vigil over a small opening in the rocks. They paid a quarter U.S. each, the little boy attached a raw wire to a car battery, and bare, flickering bulbs lit the way down the slippery hole.

Timelessly, the descent into the semi-darkness leaves every pro-mise, every safety behind. They clamored in an unsteady procession down the long, constricted passage until it finally opened up into a vaulted cavern. A shaft of light poured in through a break in the cave ceiling, and as their vision balanced out, the crystalline water began to glow a deep blue-green. Guillermo and Jean watched as Grace and Koko stripped and ventured into the water, carefully at first as the jagged bottom looked like you could reach down and touch it, but once they got in they realized it was only the surreal clarity of the water that made it appear so. It was really six or eight feet deep. 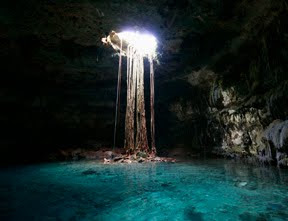 As Koko floated out, he realized that the center of the cenote dropped down in a circular shaft of the densest blue, plunging down beneath them as though straight into the center of the earth, to the raw, unprotected heart of every experience he'd ever hid behind. Grace floated fearlessly out over the unfathomable depth like she was teasing it, like she was offering herself up to some ancient unknown. Exposing herself to some suppressed demiurge. The water was soft with minerals, and felt familiar and healing, amniotic, while at the same time it was like some kind of time machine, rearranging their elements sub-atomically, sending them on to a different, totally silent life.

When they finally reached Chetumal they'd expected hospitality, but instead were met with furtive looks and men with guns – an air of mistrust and danger brought on by recent slash and burn class warfare and forced resettlement of the local Maya. They kept right on going. The road led them straight into the shell encrusted entry arch of the Hotel Laguna Bacalar, an oddly angled moderne-esque building perched above "The Lagoon of Seven Blues." It was peculiarly unfinished and lightly occupied by a strange assortment of windblown travelers and semi-permanent guests in various states of inebriation. After a day or two of assiduously avoiding insanity, they headed north on their last leg.

In Tulum, they parked at the end of road on the bluff above the crazy virdant sea, and strolled into the ruins. A viejo walked briskly out of a small block house, buckling his pants. He was, of course, the toll taker – every ruin had one – and after collecting his quarter from each walked briskly back to his quarters, just a chair and fan visible through the doorless doorway.
Only sage old iguanas guarded the ruined structures, still practically livable. With it all to themselves, and after what seemed like years of turning inside-out in the dust and the jungle, the ancient stone beachfront felt like home. Like they'd never left, or lived anywhere else. Diving chamber to chamber in the crescent caves of Xcaret, where the freshwater collided with the sea, and the lagoon of Xel Ha, alone again as they always magically seemed to be, they were spirits trapped in blue-green amber, their invitation to stay and move into their underworld permanently interrupted by the first busload of tourists to ever see those sacred places.

It was time to go, to move the sky back into position, and to detach themselves from the endless subterranean waterways that wove the underworld of their lives together. Time to head back into the world above, where there was no risk of revealing the broken-open places they'd stumbled across. 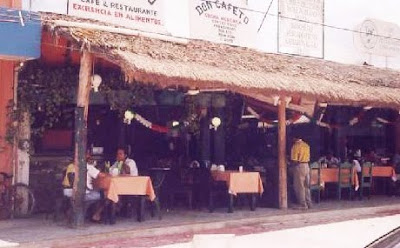 About a thousand years after they'd arrived, they sat outside at Don Cafetos on the dusty main street of Tulum, had an excellent meal, and rolled the old chrysler past Playa del Carmen, past Cancun, past sleeping jaguars and blinking lizards, off the end of the flat peninsula, and on out right past ufos following alongside, clearly visible out the airplane windows.

can be ordered online; and the first book: How to Survive Life (and Death), A Guide To Happiness In This World and Beyond is available everywhere too – but ask for them it at your local bookstore!
Posted by rjk at 6:06 PM