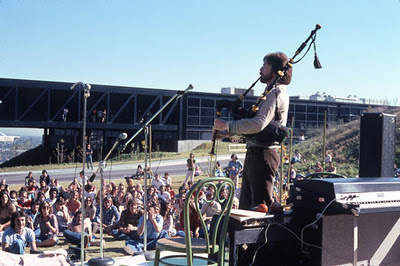 "Life can only be understood backwards, but it must be lived forwards."
Soren Kierkegaard

Could it be his Uncle Jimmy was right, and we're all born with everything already intact, like "acorns" waiting to open and unfold into whatever kind of tree we'll be? Maybe so, because from the first day at the new school, things began to happen like they do, like the whole progression had been charted out, and he was simply showing up to play his part.

There he sat in the student cafeteria with the rest of the new students at Art Center's Orientation Day, listening to the school's dour-faced administrator, Midge Quinelle, describe how difficult their course of art education would be. It seems the administration expected, in fact encouraged as high a rate of attrition as possible. Many students would find they didn't fit in at Art Center – that they "simply couldn't cut it," and so be it – it was a necessarily efficient means of dispensing with the undeserving. The flashing would have to be trimmed off the prime casting before they could buff it to a high luster, and stamp it's bottom as an Art Center product.
It didn't bother him much, he didn't intend to be drummed out or lost overboard, but it did seem an inauspicious way to launch their fresh-faced careers. He doubted that whether a student "deserved" to be at Art Center or not would have much bearing on whether their tuition check got cashed. At that time it seemed a strangely antagonistic, and somewhat chaotic place.
At the break, the new students and some faculty congregated out back, on the big patio terrace with a perpetually hazy view of Pasadena, munching on crudités, and sipping seltzer – that new kind that came in blue glass bottles. He stood above by the railing, watching the crowd of his mostly doomed schoolmates schmoozing, forming early friendships and allegiances; cozying up to the teachers and department heads. The upscale kids mixed easily as though their success had been guaranteed, because strangely enough it had been, due to the politics and pay-offs common to their class. Many of them already had jobs awaiting with top agencies and the like, which was as it should be – their's was the art of the pre-existing, not of the as-yet-to-be-discovered. Kids who'd got there by the seat of their pants milled about hungrily on the edges, as did the uneasy Asians, struggling with English as a Second Language.

He walked down and grabbed a blue bottle and a cocktail paper plate of cut carrots and cucumber, and something caught his eye. The crowd opened up as though they were moved out of the way stage left and right on rolling risers, and there, alone on a concrete bench, sat a beautiful girl, her face a little bit twisted by tears. Heroic codependence swelled up in his chest. He suddenly had a purpose greater than simply engaging in the self-serving chit-chat.

He went and sat with her and asked why she was crying, but she didn't know really, it was just nerves perhaps. He put a carrot up his nose and she laughed. It was dumb, but it worked. He told her about the funny house he lived in, and the bar-b-que joint down the street, Gus's, that had neon chickens and pigs running down the side of their sign – and a Chef Pig on the menu, serving himself on a platter. With what he imagined to be the proper measure of jaunty suggestiveness, he asked her if she "would like to join his pork club?" To which she replied, "That depends on how many members there are in it" – and that about did it. That's how they met and fell in love.

The school was difficult, not because of the course load, but because of the unusually unnecessary rigidity of the the people who ran it – mostly Mormons as it turned out – insecure people whose moral foundation is knowingly built on a premise so bereft of credibility that their justification of faith and purpose must be willfully shifted to something more substantial, like commercial acknowledgment, financial success, or the canonical Jesus. They seemed to be confused about what an art school should be. No human expression was permitted on the polished concrete walls. No risky or possibly "avant garde" projects ever needed to be encouraged. Illustration and Fine Art majors required no up-to-date equipment – that was for the product designers and ad people only.
He had some good teachers who helped him see new horizons; and others who taught him more of what he had already learned in his life up to that point; but little of the good or bad of it mattered much at all when viewed through love-struck eyes. Like always, school was what you brought to it.

The two became one of the first fast and happy couples at school, which was fine, because everyone could see how well-suited they were; and it didn't seem to effect their work badly at all. She saved him from his crazy hot dusty attic, and brought him to live with her in the cozy little apartment with a pool that her father had arranged for her. And so, as in those golden-tinged dreams of youthful love anew, they ventured down the pre-ordained path that led to ten years of adventure and marriage and travel and struggle and eventually, as is so often the case with stories of the sort, emotional disaster, heartbreak, and loss.

Read about concepts like these and much more in: How to Get to Heaven (Without Really Dying), Wisdom From a Near-Death Survivor  from Llewellyn Worldwide available direct on this page, or online. The first book: How to Survive Life (and Death), A Guide To Happiness In This World and Beyond is available the same ways – but ask for it at your local bookstore!
Posted by rjk at 1:53 PM