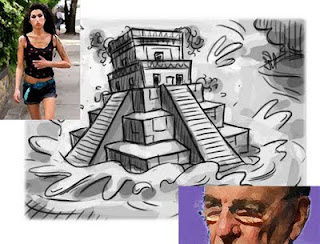 Will 2012 finally begin the sudden shift in consciousness promised by some? If a profound new state of human consciousness is really right on top of us, why does it often seem that the social and cultural transformation we long for threatens to be just another failed "Rapture," only this time not for some misguided evangelical cult, but for all of us – the sanely, progressively, spiritually faithful. There's one very big reason not to fear this potential disappointment: What we're waiting for is already here. 2012 has come early.
It's in keeping with the limitations of human perception that it's not so easy for us to see the progress that we've collectively made already. It requires an objectivity that most of us have trouble gaining, constrained by our pernicious human Egos, and misdirected as we are by our corrupted media.

When I was a child, only a few decades back, there was practically no environmental awareness, no recycling programs. There was no energy conservation, no Endangered Species, no locavores, microloans, sustainability, no "repurposing," or green anything. Vegetarians were "hippie weirdos." People who opposed atomic power were crazy troublemakers. A poor African-American man from a broken home could never become President. Impossible. All of this is more than possible now. It is.
Practically unimaginable just twenty years ago, we now have the means to instantly connect our progressive spiritual consciousness globally, like a single entity.
Evidence of this shift is everywhere, even in the least likely of places – the popular media.

Amy Winehouse was an amazing talent, as anyone who saw her perform at her peak would agree, but she was seized and destroyed not by personal irrespon-sibility or a lack of will-power, but what we all know as a spiritual, physical, and mental disease that so many of us have witnessed and had touch our lives that even the media celebration of her sadly ironic hit, "Rehab," was uneasy, at best.
No one was surprised when she died, and only the least con-scious among us could enter into that state of comfortable denial that would have been commonplace just a few years ago. Even corporate media talking heads couldn't package it as usual. Advertisers couldn't bumper the story with beer ads. Even they intuitively knew better.
It was Ms. Winehouse's karma to make this message about the necessity of loving tolerance through her unfortunate life and sacrifice. In this sense, she's evidence of the end of media denial, the "self-immolating" start of a revolutionary consciousness of recovery; not unlike the burning martyr who launched the Egyptian revolution.

When Rupert Murdoch's "News of the World" collapsed under the weight of the oppressive soul corruption that drives his power, the fear-based tension keeping all those lies aloft was in an instant deflated, and collapsed into the shadow of the new era of Ethics and Compassion, already standing over it, sending it's irreversible message that the era of fearful, exploitative power has come to an end. The destructive delusion of it is as sadly transparent as the stories told by a bitter little man, answering to a Parliamentary panel. The Emperor has no clothes–they've been dissolved by the penetrating light of our "new" shared consciousness.

The oil spill, the earthquake and meltdown, the continuing unnecessary starvation in Africa, the financial collapses, the un-conscionable irresonsibility of corporate food production, the stupidity of fracking, the ridiculous political "good cop, bad cop" routine in Washington, the revolutionary bloodshed in the Middle East – these aren't news items to engage or enrage only "the left," they're issues of a global order, experienced tangibly, empathically, instanta-neously by the great majority of humans on the planet.

The forces tenaciously clinging to power in the face of this irreversible sea change see that "The Kingdom is already spread across the earth" (even when many of the faithful don't yet realize the enormity of the transformation already among us), and so they plot and consolidate, but too late – the genie of cooperative con-sciousness is out of the bottle. Their time is over. It's likely to be messy, the embedded power "elite" won't go easily or particularly quickly by the measure of a single lifetime, but that's okay as it is, profound change is always writ larger than just a generation. The bulk of the change has already happened.

So if the new consciousness is really here already, what can we do to bring it into it's ascendency, to create the compassionate, intelligent stewardship that will "save the world?" We've got heroes: The Ernst Laszlos, and Arundhati Roys, and Johann Callemans, and Daniel Pinchbecks (thx Evolver!), and Amy Goodmans, and George Noorys and Julian Assanges, and Eckhart Tolles and Ammas. We've got eco-activists, and "hacktivists," demonstrators and the blogo-sphere. If you're one of those action-takers, God Bless You, but if not, here's what you can do to keep powering up what has already become far more powerful than you may realize:

Keep doing exactly what you've been doing, only a little moreso! Stay open-hearted, do service, stay connected, keep actively engaging your intuitive intelligence when it comes to important decisions. Heighten environmental responsibility. Take part in the process to the degree you're able, and vote. Teach tolerance. Have compassion, even for the less conscious among us. Love each other. Keep growing into your true spiritual potential personally, and we all will collectively. Each of us truly is all of us in this era of quantum consciousness.

Step up and assume the role of the enlightened majority present on our planet now; start living in the era of cooperative con-sciousness, using the intuitive intelligence that lives in everything, in everyday, in every life, "large" and "small." You needn't wait for our time to come. Our time is here already.

"Our present world is conditioned by our present mode of consciousness; only when that consciousness passes from its present dualistic mode...will the new creation appear, which is the external reality of which our world is a mirror."
Bede Griffiths

The book: How to Survive Life (and Death), A Guide To Happiness In This World and Beyond is now available everywhere, but ask for it it at your local bookstore!
Posted by rjk at 4:35 PM