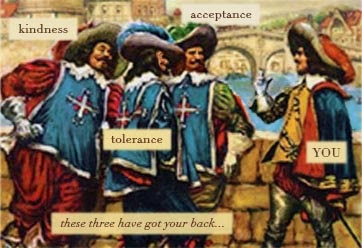 Kindness, Tolerance, and Acceptance are kind of like the Three Musketeers of spiritual protection. Don't ask me which one's Porthos or Athos or Aramis, but suffice to say, you are probably D'Artagnan in that mix (as you'd like to join their crew). There is no assault by any evil Robespierre that these three can't out-maneuver and overcome. There's no army of worries or fears that together (with you joining in), they can't defeat.

Kindness is probably the most readily accessible and the easiest to summon up, since we all know we're capable of it spontaneously. As an action, it's the most actively proactive because we can always simply use it all the time. When we're as kind as we can possibly be to everyone we meet, without being at all patronizing, we energize our lives and the lives we touch with a positivity that's absolutely transformative. Kindness flows into people and situations like a calming, lubricating emollient – yet just below that smooth surface it packs a real punch - the underlying positive power to support a soul or a situation with unshakeable solidity. Just ask the Mahatma, as kindness is the proactive element of the Hindu concept of ahimsa (absolute nonviolence) that he based his revolution of human consciousness on.

Try it, apply it, give it a test-drive for at least a couple of days, and watch the way it changes your life – dramatically improving it so much that you never would have believed it could be so easy...and fun. You'll discover that there's a secret world, a conspiracy of kindly like-mindedness constantly at work in the world, right under your nose.

Next is Tolerance, and tolerance is simply identification. The destruction of separateness. Tolerance is compassion and forgiveness, neatly wrapped into one.

If you just give it a little thought, you can easily see how most of our difficulties, personally and culturally, are self created, coming about as the result of feeling that we're separate and somehow special or different from everyone else, when naturally nothing could be further from the truth. To paraphrase what I believe is the single wisest thing Ronald Reagan ever said: If the Earth were under attack by aliens from another planet, how long do you think it would take us to get over all our differences?
That's easy to answer, don't you agree? Every uncomfortable difference would disappear almost immediately, as we would unite to protect our beautiful home. When we look at the Earth and all it's inhabitants in that context, we see the foolishness in considering ourselves different from one another at all. Everyone is literally in (or on) the same blue boat, going about the exact same business of being, with the same thoughts, fears, and joys determined by our slightly different sensory identifications and experiences.

And unfortunately our planet is under attack right now by an inhuman invader called Fear – the sick army of the collective Ego that takes the form of elitism, exploitation, greed, and prejudice. As is often pointed out, it's the result of humans doing, not of humans being.

"Tolerance is giving to every other human being every right that you claim for yourself."
Robert G. Ingersoll

Lastly, Acceptance is the toughest to come by, often seeming to make the least sense in light of the basic injustices of Life. And it's true – some things just aren't fair or right, but nonetheless they still simply are. So Acceptance requires a sort of vigilance, of continuously turning it over. Simply put, it's open-heartedness, just allowing life to be as it is, as it always will be, and keeping on the lookout for what is inspired by Love, and what isn't.
In that sense, there's never anything attacking us personally – just "Life on Life's terms," and the ongoing challenge to find the Love constantly flowing around and through us. The Love that lays just beneath the noisy surface artifice of ego and unconscious self-centeredness. Acceptance is a kind of surrender – as a strategy. Joining up with the energy and power of that underlying Love. Joining the winning side. Acceptance is essential in redefining "success" as a practical, and grace-filled state of being.

So there's Kindness,Tolerance, Acceptance, and you. And all together, there is just is no problem in Life that we can't  resolve. With all that in mind, what was the battle-cry of the Musketeers?  Oh yeah...

Read about concepts like these and much more in: How to Get to Heaven (Without Really Dying), Wisdom From a Near-Death Survivor  from Llewellyn Worldwide available direct on this page, or online. The first book: How to Survive Life (and Death), A Guide To Happiness In This World and Beyond is available the same ways – but ask for it at your local bookstore!
Posted by rjk at 12:29 PM