Tales: Are You a Donut Too?

Have you ever thought of yourself as a donut? Hmmm, not really...though there have been times when I wanted to eat enough of them to possibly become one myself. Becoming a donut, just for a little while, can be instructive, as crazy as it may sound.

Here's how it works: A donut is a mix of elements that generally takes one of a few different, but similar forms. It comes into this structural being through a difficult transformational process. In most cases, it gets fried. Constituted of fairly predictable ingredients, surrounded by The Universe, it features a small space in it's middle that contains another little piece of The Universe. A hole. Nothing (or "emptiness," the Buddhists may say), surrounded by more donut.

The ingredients can work delightfully well together, or they can become a bit unpleasant. So the effect can be at times utterly delicious, and at other times a little too much. Laboring the metaphor? Well, bear with me for a moment...maybe a visual will put it over: 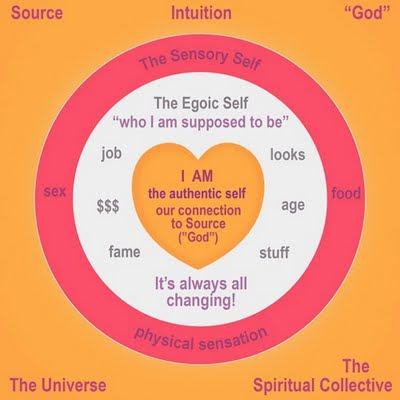 If you look at the diagram above, you'll see how we're a bit like donuts ourselves. Our outsides, where the glazing is, is our physical interface to the world – our sensory selves. Sticky and delicious. Sticky and unpleasant (collecting stuff). Everything we feel and sense: hot, cold, pleasure, pain; arising unexpected waves of intense sensation, torporous states of inexplicable numbness; bitter and sweet; an erupting giggle, or a fit of uncontrollable sobbing; some coming from without, some coming from within.
Our sensory selves are our human covering. Our senses. The feelings that arise and dissolve; the physical joys of being human, and the source of our unwanted pains. It's very seductive, even addicting at times, all of it. It can also all be rather relentlessly brutal as well, on occasion. But by themselves, these sensations and reactions are not completely who we are.

The inner ingredients of our personal donut consist, in part, of thoughts, like who we think we are and how we see ourselves in relation to the surrounding Universe. What I look like. What I do. How much money I have. Whether I'm a "success" or a "failure." Whether I'm happy or not. "T'is the stuff dreams are made of," because an awful lot of it just simply isn't real. It only seems that way to us, maybe not even to anyone else.
It's hard to be objective about this part of ourselves, even though this is the Ego part that tends to make us feel so separate and unique; and every single one of us is unique, despite the truth that our donut is made from the exact same ingredients as everyone else, arranged in slightly different ways, and is always changing. Sure, we're unique – all in the very same way. Our Egos make it hard to see how alike we are.
If we identify ourselves with this "separate," ever-changing, often imaginary self-portrait, filled with inaccurate judgments and comparisons about ourselves and others, the result can be painfully over-indulgent, and lead to tremendous discomfort –"dis-ease."

Did you know that the rich, handsome, successful actor Cary Grant was really a donut? He was heard talking to someone, confessing his profound insecurities, and when the man said, "you don't have anything to worry about, you're Cary Grant!" The actor replied, "I wish I were."

Our Ego keeps wanting us to somehow control The Universe, not to just be a part of it, and in doing so, demands the constant judgments, inventories, and evaluations that further separate and disconnect us from that truth that lies right in our very center, in that eternally grace-filled and easy space that also surrounds us – our true birthright.
In the diagram, I've made that "hole" in our middle heart-shaped because that's where The Universe, Grace, "God" lives in us, and how it is connected to us. That's who we really are.

Since that's where our Universal Consciousness, our "God Consciousness" lives, when we can unify that true space within with that unifying space that's all around us, we'll become both "hole," and whole. Our donut, and all the misperceptions of "who we really are supposed to be" begin to dissolve, and life becomes much easier and more comfortable as we become the Grace that we're truly meant to live within.

Besides, we don't really want to be a donut...maybe just the "whole" in the middle.

Thanks for the inspiration to Eric Jiaju Lee.