Tales of the Koko Lion, Part 23: The Saturday Matineé

A full-on hellacious meleé is what you could call it, and you'd be right.

That would be a very fair description. There would be about a thousand screaming kids, 98% of them boys from the ages of six to twelve, packed into the indescribable moderneity of the old State Theater on El Cajon Boulevard in San Diego, somewhere back around 1962. It was like that every Saturday, at the weekly triple-feature matineé. All the kids' moms dropped them off, like mine did, watched for us to purchase our tickets – thirty-five cents back then – waited for us to go in, and then rumbled off in their classic Chevys, Fords, and Plymouths, that weren't even classics back then. Every mom had one, and apparently, some place to go in it. 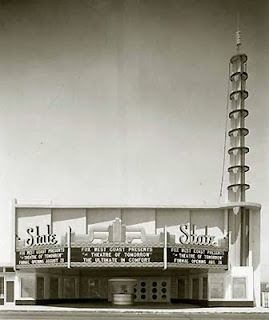 I would stop at the snack bar and get a red-striped tagboard box of popcorn for fifteen cents, and a Nesbitt's orange for a quarter. For seventy-five cents, my mom could drop me at the theater for almost six hours. A teenaged "usher" (often with a challenged complexion), wearing a very official dark blue, gold-trimmed uniform would push the lobby doors open into the main theater, and reveal the utter insanity within. In those days, they took you to the seat they chose for you, pointing it out with their flashlight, but once they chased some other kid back up the aisle, you got up and moved to where you really wanted to sit. I liked to sit slightly up from the middle, down the right-hand aisle.
If you looked past the teeming kid mass – the flailing arms, kids standing on the seats, kids crying for their moms, kids running full speed down the aisles pursued by the harried teen ushers – you'd behold the intense decorative splendor of the stately State Theater interior, whose tropical Botticellian paisley flourishes fluoresced slightly when the lights went down. 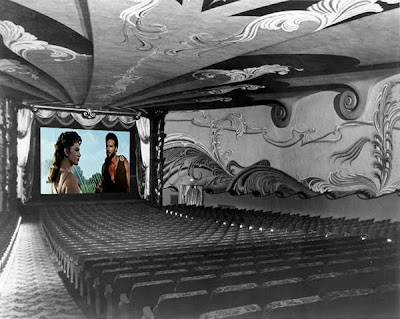 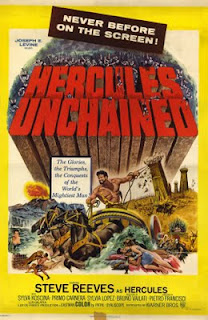 The show started up with an animated snack bar bumper, and a card offering the "smoking and crying baby booth in the rear," just before the golden Warner Brothers frame bounced the screen into life, and the kid-mob, at least for a little while, calmed down to watch the cartoons. About half way through the muscleman marathon, the kids would get restless and started taking the place apart at the seams, starting with the inevitable winging of the flattened popcorn boxes with their wickedly unpredictable trajectories, and ending up in an all-out pandemonium that necessitated the turning on of the house lights and the theater manager walking up on the stage to sternly announce: Any unruly or destructive children would be ejected from the theater. The kids could care less, but everyone quieted down so the lights could go back off, the movies could start back up, and the insanity could build again to another fine state of perfectly frenzied hellaciousness, launching the whole cycle all over again.
The last two or three hours were always ragged like that, the over-taxed theater staff shouldering the Herculean task of containing a thousand agitated boy-children, all ready to break their slave's chains, and slay the Minotaur. I didn't take part in the antics much, I was too deeply immersed in the incongruously lip-synched world of quasi-myth, rife with nascent formative sexual stereotypes, and the enhanced and simplified life onscreen, complete with it's clear and predictable moral resolutions. Why wasn't my life more like that? It confused me, I'm sure (like everything did), and I just wanted to be Steve Reeves in my jaunty dress-toga, there by the statuary-lined reflecting pool, saying my sad, heroic goodbye to the beautiful Sylva Koscina. Why would I ever leave her? Oh yes...slaying the minotaur always took priority – in place of any real, committed relationship...it's not easy being a hero.

The show let out late in the still heat of the afternoon, and all the moms idled up in their massive Impala or Fairlane or Country Squire wagons to collect their kids as they poured out onto the too-hot, too-bright sidewalk. I walked myself the five or six blocks over to Adams Avenue, to my Grandma Minnie's apartment, the little place of her own my Dad had set her up in. She was worried there, waiting for me to show up, questioning her daughter's judgement – a poor little boy walking all that ways alone.

She made me "supper," usually some canned corn beef hash, or succotash and fried baloney, a piece of white bread warmed in the bacon grease she kept in a coffee can by the stove. I pretended to eat, or hid it when she wasn't looking, waiting for the reward at the end of the sad little pioneer-style meal, and she never failed me. After I'd pushed the meager little meal around my plate long enough, she'd make me a piece of bread with her famous peach and pear jam on it — still the best jam I've ever eaten.

Mom always showed up a little later than she was supposed to (I never knew from where), picked me up and asked how the movie was. We drove home, mostly quiet, and I just wondered, where is my chariot...and where, oh where is my Sylva Koscina right now? 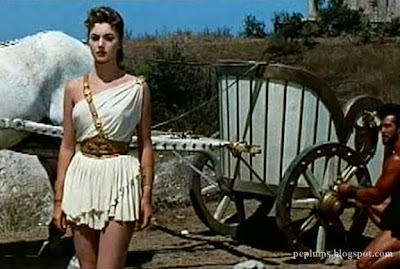