Tales of the Koko Lion, Part 22: Sculpture Time, and An Early Departure 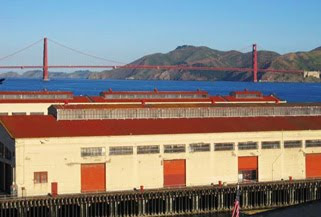 Like Billy Pilgrim, Koko had become unstuck in time.

The skills he'd picked up in the chilly little factory in South San Francisco, welding and flame-cutting, had led him into a rather unusual set of circumstances. Everyday, he drove up Van Ness from the warehouse studio of Albert Nelligan, south of market (before it was "Soma"), to go back to work on the huge skeletal steel sculpture housed in Pier 2 at Fort Mason. He and Sven would open all the western rolling doors, and let the wind flying past the Golden Gate blow the clouds of tight, acrid steel smoke out through the other side. It was cold, but close to the furry sputter of the MIG welder, in a shower of sparks, with his coveralls, leather sleeves, smoldering gloves, and the incessant whining, grinding wheels GREEEEEEEning through his ear protectors, bits of slag popping off his face shield, chunks of molten-edged quarter-inch stock bouncing off his steel-toes, he didn't really notice.

He remembered when he picked up the phone, when Kathleen called him, and he was back in Del Mar again, walking up the hill with her from the little adobe house, past the train station. She was elfin, you could say, slender, slight, languid but pointed, with her straight red hair and the greenest eyes. He felt she'd never been on the level with him. Why had she held back so long? Why was she still holding back? He chalked it up to the age difference–her hesitance for the future. Then she'd coyly sent him north, like she was sending him away to camp.
Now she called to tell him about her ex-boyfriend, the sculptor from Milwaukee, to ask if he wanted out of the factory, so he could try on the glamorous world of Fine Art and high living. She could fix it. Then, suddenly, he was back on the pier, with that ocean wind blowing up his pant leg.

Nelligan was a long, ruddy-faced fellow, with high, tight jeans, and an incongruous cowboy hat. They understandably hadn't hit it off too well, he and the kid being sent to him by his ex-girlfriend, but he gave Koko a job anyway. It was a favor to Kate, as he called her.

Months passed, there in the cold old pier building the Army had just opened up. There were still old boxes of Army stuff tucked in corners, probably all Top Secret in its day. The fabrication went slowly, just Sven and Koko and a boozy helper or two. Sometimes crazy Roger, the ex-navy engineer, would come in and fix things, but Albert was always out, chasing tail and trying to talk the upper crust out of it's money. Between whatever curious antics he was mixed up in, and Roger's model building, he somehow kept enough money coming in to keep the whole iffy undertaking afloat. It was supposed to culminate in an unveiling out on the bay, spectacularly employing a weather balloon flotilla to gently lift panels from Christo's Running Fence up and off the thirty foot tall sculpture. You had to hand it to Nelligan, he always succeeded in thinking on a grand scale.

About three nights a week it was party time at the warehouse; the hot tub, the fire-man's pole, target practice with a brushed steel Smith & Wesson, a giant neon index finger, twitching up and down, pointing at Nelligan's big brass bed, tearing down the stacked-up wall of champagne cases, a classic cast of ingenues and hangers-on ingenueing and hanging on.
After work (he could have showered with a magnet in place of a bar of soap) Koko spent most of his free time baby-sitting Jean Goldberg, an heiress with a nose jones and a crush on Nelligan, who needed her connections, but no part of her otherwise, so the job fell to Koko to escort her evenings at L'Etoile, secure her patronage, and pilot her fat little MGB GT around Pacific Heights, chasing the next "place to be," wherever that was. He was a twenty year old kid, and he already felt tired.

Then he was out on the water, on the barge that day of the unveiling, the same stiff wind from the west blowing the giant balloons sideways. They all wore the same thing, silly chrome work helmets, and custom-screened tee shirts. Sven climbed up to the top of the massive piece, caught the folding knife Koko tossed him, and cut down the giant fabric panels, revealing the huge, wonky sculpture they'd all given a couple years of their lives to.
The TV news teams lost interest and moved on when the sloppy spectacle hadn't come off as planned, leaving only the little crew and their followers to celebrate the fact that the whole thing hadn't ended up on the bottom of the bay. It was an ignominious unveiling for the happy twelve-ton toy, which sadly, it seemed, no one really wanted.

Suddenly he was much older, in a room alone, and it rose up to him on the internet, weeds growing underneath it, it's cartoon colors covered with whitewash.

Koko'd had enough, took his under-the-table cash, loaded the VW with everything he had in his life, and headed off to art school in Pasadena. Then he watched years zip by, like looking out the window of a time machine. Like watching years tumble by in a dryer. Grace went by, and Pamela, and he was at the tennis match in Forest Hills, being introduced to an "important" woman in front of them, and it was Jean – the crazy heiress who turned around and nearly spit when she saw him. She'd changed her name by marrying a Brazilian polo player, and had done a little something to her face, too. She pretended to barely know him, looking at him like...don't you dare...

It seemed like he'd barely settled into school in Pasadena, but then it must've been longer than he thought. Almost like everything in an entire life had just gone by. He called Kathleen, to tell her about the sculpture ending, that he was coming back to the beach to see her, but her phone had been disconnected. When Koko returned, and right away asked after her, a friend looked startled and said, "How long have you been gone?"

Suddenly he could see Kathleen's sad, pretty face drifting south, smiling a bit, the dull sparkle...that wistful resignation. It wasn't hesitance. It had never been her hesitance. In an instant he was with her again, just for that last second it took to realize. She'd never told him about the brain cancer that had been in remission, that was her story before they met. She hadn't wanted to upset him when it came burrowing back. "...didn't anyone call you?" His friend asked.

She was only thirty years old, and she always would be, and suddenly Koko was back here again, much, much older than that.

"We are close to waking up when we dream that we are dreaming."
Novalis 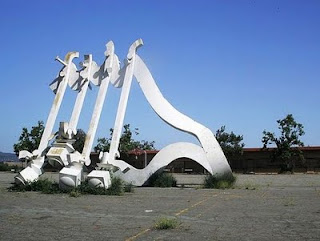 The book, "How To Survive Life (and Death)," is available from Conari Press, or at all major booksellers––but ask for it from your local bookshop.