Koko woke up with a funny picture in his head that morning. Funny, as in different, entirely unexpected. It was a picture of a feather - a single, perfect, chestnut-brown eagle feather. Why it would be filling his mind was a mystery, but almost the instant he swung his legs out of bed, he found himself pulling his feet through the stocky green cargo pants he wore for working at the River House.

"Where are you going?" Suzy asked raising her head, his sudden, purposeful movement waking her all the way up.

"I have to go...up the river bank," he answered. He was kind of gone already, busy concentrating on an inner voice (perhaps the voice of his Kickapoo great-great grandfather), telling him: They have a feather for you, up the river bank. You must get up and go find it... It was like that. Crazy, but solid and insistent, and not to be denied, and so he found himself pulling on yesterday's socks too.

"There's a feather there."

"That's all. They're just telling me, "there's a feather waiting for me up the river bank."

"I'm coming too," she said, jumping up and into her clothes as he headed out the bedroom door. 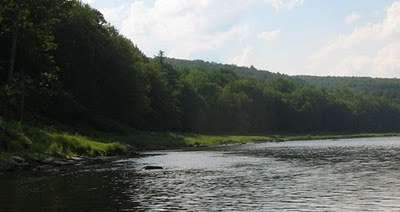 They started upriver, along the Pennsylvania side, she wore rubber gardening clogs, and he had the rubber knee-highs that came with the house. Each of them carried their long ash walking sticks, hers with the bark peeled down to white wood, his with the necessary girth to give any threat a good whack, if need be. If Suzy had known just how many snakes she was stepping over, or on, she would have been screaming like a schoolgirl the whole way, but she hadn't been there long enough to know yet, and Koko's intuitive calling took precedence over any phobias she was nursing. Funny, how an intangible necessity can vanquish any fear the mind might create. The snakes all seemed to know, and stayed well hidden, on her account, no doubt.

The two of them crunched and squished their way up the bank, weaving out to the river's edge and back "inland" along the scant deer and critter trail, sometimes on firm ground, or hopping rock to rock to avoid the spots you couldn't stand on without sinking.

He knew right where they were going, to the place up under the stand of towering white pines beneath the eagles perch. There, every day, from their pine-top promontory above the tree line, one or two of the great white-headed adults could keep watch on the river from the Narrowsburg bend down to Masthope. They sat stoically hour after hour, but they also did their fair share of preening and squabbling, so it made sense that a feather might be found underneath the spot, if one made it down through the tree limbs to the ground, or missed being carried away by the wind.

The longer they looked, the less likely it seemed, the grass and poplars low on the bank would have swallowed any feather landing there, and up in the barrens at the base of the trees it was easy to spot anything on the ground, if there were anything but pine needles. But still the insistence in his head: Keep looking, it's here for you.

"Let's hope they didn't get us out of bed for nothing." He said, clamoring back down the dry bank to the soft river's edge. He'd give it one last look, navigating along the base of the bank, where the pine roots held back what the river couldn't have. His eyes scoured the grasses for any sign of a feather that might have fluttered down from a hundred feet up and landed lightly, but to no avail.

"Did you find anything?" Suzy asked from up under the trees.

"Nope. I don't know why I felt so strongly..." Koko replied, like he expected all intuition to be magical, or something. He turned and looked up to her above, and as he did, something caught his eye.

There was a series of shallow, twisting caves in between the tree roots cascading down the bank. He bent down, and looked up into one that was about eighteen inches wide and a foot high. Hello, it said...you see, here I am for you.

One perfect, foot long, chestnut brown eagle feather sat tucked on a rakish angle, as though positioned by a stylist's hand, up in the mossy cubby hole. It was only visible from where Koko squatted in front of it. He 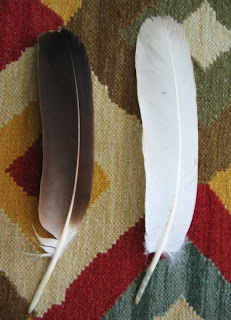 gently brought it out and held it up by the quill shaft, "Suzy..."

She looked at it with wide eyes, and looked back to him and smiled and didn't say anything.

This is to let you know that the eagle's steady gaze looks right past this world to your great-great grandfather's home in your heart. This is their gift - the gift of this feather for the faith in the voices of your ancestors that you can hear when you open your heart. This feather tells you how much more can always be seen if you look beyond this world, into the invisible world where everything comes from, and goes to. Down on the ground, it's hard to find without this faith; from up where the eagle looks out over the big picture, anything can manifest.

"Split a piece of wood; I am there. Lift up a stone; you will find me there."

Logion 77, The Gospel of Thomas