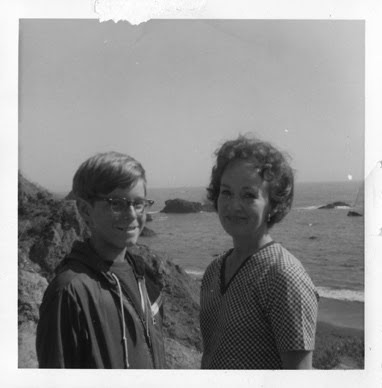 With Ruth, who finally helped him become whole...


"Yeshua said: Blessed is the lion which becomes human
when consumed by a human.
Cursed is the man who is consumed by the lion,
and becomes the lion."
Logion 7, The Gospel of Thomas

In the dream he had become the Koko Lion – that is to say he had emerged from his battered chrysalis, that he'd finally broken through the exoskeleton of his damaged Ego-Self. He could stand now fresh and fragile, as a mostly unknown but nonetheless whole man. In the dream he was in a place that time had long ago covered over for him – the downstairs of his father's house, on the rocky hillside overlooking the canyons. Time had been opened up and laid still. Everything was exactly as it had been in his childhood. He was there, in a reality that concurrently ran through and beneath this one.

He looked down the long hallway that led to the rooms he and his brother shared, at the farthest end of the house. Diffuse light glowed through the bathroom louvered windows at the end of the hall, inviting him to enter the past. As he gingerly walked down the hall he noticed every little thing was just as it had always been. The linoleum floor tile with a tiny chipped corner. The cabinet door, always ajar (it never would close completely). On his left was the door to his brother's room. On his right, the door to the outside, to the patio and through the oleanders into the canyon, the rusty dirt and granite rocks covered with lichen, the foxtails and sage and scrub.

Past his brother's door was the door to his own room, a little bit open. He sensed someone inside, someone he was meant to visit. He pushed the door open and looked in, and there sitting cross-legged on the floor was a little boy, ten or eleven. The boy was drawing intently, but seemed as though he were putting together a jigsaw puzzle, searching for the lost little piece that would fit, that would make the whole thing make sense. But it wasn't there. He was trying to draw a picture of it—of that jigsaw piece—like a little Disney-map island somewhere in a turquoise sea that he could fly away to. The Island of Lost Boys.

"Hello," said Koko softly. The little boy looked up, with recognition and a little fear in his eyes. "May I come in?" The little boy said nothing, but Koko recognized him immediately, walked in behind him, and gently bent down onto one knee. The boy had stopped drawing and put his pencil down and was just sitting in his little bedroom world, drawn on the paper before him, surrounding him, spread in little pieces on the olive brown carpet. Koko put his hand on the scared little boy's shoulder, and turned him slightly to face him more.
"There's something I want to tell you," he said softly, comfortingly. The voice that came out of him was a surprise, a voice like a man should sound – like a father, or a solid big brother. He looked into the boy's sad eyes. The boy looked up at him expectantly, like he wasn't going to believe any solution this strangely familiar man had to offer.

"It's not your fault," said Koko,"you were only born here. There's nothing that you've done wrong." The boy looked like he was going to cry. "These people have to do the things they're doing. You're not to blame for any of it. You can know that in your heart, and just keep going." Tears welled up in the little boy's eyes. Koko hugged him, and the boy pressed his face into his chest. "I know it's a tall order for a little boy, but I'm always here for you, and you'll find there will be others you can ask...."

Koko knew the little boy wouldn't, that he would never ask for help, not until he absolutely had to. Not for many years – not until his jigsaw world finally fell apart completely and he was covered over by a scar tissue chrysalis of his own, that his ancestors and Angels and Love would have to help him break through. He couldn't tell the boy the whole path he had before him, the way to manage it, to survive it. He was still so freshly emerged, that he didn't know yet himself. He knew it was the child's own karma-path, and could only hope that he'd helped somehow.

The dream ended there, like that, though Koko wanted it to go on so that he could do more to protect the boy. So that he could try it again, and grow up with the little boy, and give him the hope and the sense of all things being possible that he was just beginning to learn himself. But he knew that he would—that they each would—have to find the faith to make that realization on their own:
To find the forgiveness that reaches right through time, that lives and brings life in every moment.

"Like the grasses showing tender faces to each other, thus should we do, for this was the wish of the Grandfathers of the World."
Black Elk

Readavailable direct or online. The first book: How to Survive Life (and Death), A Guide To Happiness In This World and Beyond is available the same ways – but ask for it it at your local bookstore!
Posted by rjk at 5:50 PM