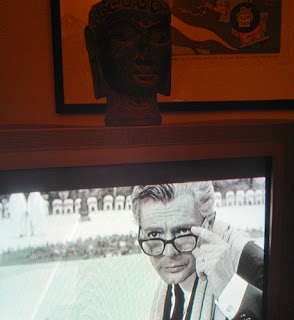 Koko just couldn't pass it up any longer, that tiki torch cocktail lounge with it's glorious lacquered bamboo façade, so when Grace needed a ride to the airport to visit her aunt, he volunteered to drive her, knowing the trip home would take him right past the place—past it's flapping torch flames, and red chop suey script sign. The round trip would take him much farther away than he ever could've imagined. He parked her car—the one she loved, the one her father bought her—in the side lot, and ambled into the place as the sun was setting.
"Gee," he told the waitress, whose features are long since forgotten, "I've never had a Mai Tai." "Then let's fix that," she said, smiling. She smiled at the first easy Mai Tai, and easy it was, bright orange hanging garden of fun in an imperial pint glass. The second was still fun too. But the third spelled trouble, and forgetting her face was just the beginning of the bad part. She knew that sideways loss of recognition all too well, working at The Tiki Lounge, there in downtown Glendale. But Koko really had never had a Mai Tai, at least not an official one, and he could've sworn that he didn't feel a thing after the first, or even after the second. He never felt all that much anyway, so the third seemed like a reasonable experiment. He hadn't quite finished it when leaving seemed like a good idea too. The King Kong Club interior looked too flammable to last.

It was an easy drive. Weren't they all? A quick hop home—and just to be on the safe side, there were unexplored back streets that pointed in the right direction, and promised a cop-free ride. After all, it was always smartest to err on the sidestreet of caution's sake.
Now it was dark, and there was a stubborn cassette acting up in his wife's car's tape player; and a funny, winding little suburban street, right where they should all be straight, and a little too much foot on the... BLANGG!!
The tape broke and sputtered out of it's dashboard slot.

"Pingk... pingk.. .pingk..." went the wrecked car, steam hissing out of the stove-in front end. From where Koko was, near the top of the telephone pole next to the streetlight, you could see everything real easy. Steam poured out and roiled up through the light against the dark sky, hot water running all out on the blacktop. Some other liquid, dark and glittery on the ground. That stuff. Dark dark red, and sticky.
The Celica's front end was really bashed in, but the pole wasn't even crooked! And what was that down there below? Koko wondered...what is that I see hanging half way out the busted window down there? The windshield was busted too, like a tempered glass spider-web target. The steering wheel was whacked into a loopy shape, his motionless arm draped through it. Lights in the neighborhood snapped on, and Koko could hear their approaching voices..."It looks bad... somebody call the..."
There, twenty feet below, with his very badly busted face in, just out of the light, was him. Was me, thought Koko. But he was up here—safe and sound, it seemed—though he couldn't see his hands or body. Perhaps because his body was down there, a bloody broken mess, wearing a red drenched punk t-shirt and black jeans.

Koko stayed for a minute, silently hovering up high, next to the streetlight. It had been long enough now, until he realized that that wasn't him anymore. And he wasn't alone—no, there was somebody safe just behind him, just out of sight, and they spoke to him but not so's anyone else could hear. They told him it was time to go, and so he reluctantly moved along, shepherded into the warm grey cotton night. From then on, he forgot, with only washed-out flashes coming back years later. A piece of effervescence. A seat in a pastoral place. An inventory of some kind...

Koko came to, briefly, in another ambulance, being taken to the hospital where the University had their plastic surgery residency. Then he slipped back to that other place, where he wasn't him anymore, and stayed there for "twenty hours" or so. The girl had long gone back to waitress again at The Tiki Lounge by the time he finally woke up, for better or worse. He had a little different face. He had a whole different life, beyond this one...it seemed. Alongside of it, perhaps. It's funny, he thought, to die—to know how easy it is. Like walking into another room.
But it was only a personal knowing that would play a part in changing him many years later, when he finally realized that he couldn't just live this body's life anymore.

And as for Grace, well she cried of course, for Koko and his face, and for her car. But from that point on, they never discussed it again. They would be apart for many years by the time he really awoke from the impact of that day, and came back to life.


Read about this and 2 more NDEs in the new book:can be pre-ordered online. The first book: How to Survive Life (and Death), A Guide To Happiness In This World and Beyond is available everywhere – but ask for it it at your local bookstore!
Posted by rjk at 10:57 AM