Tales of the Koko Lion, Part 16: May the Force Get Started 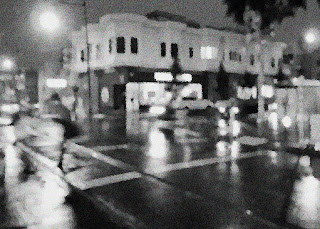 It was being San Francisco again. A dense gray-blue watercolor sky bleeding down into the wet streets. San Francisco was fine like that. A little rainy and a little dreary. It felt right, and smelled good when it rained, and the fresh Pacific flow scrubbed the town from edge to edge, so that when it rained the streets sparkled grease-lessly, like no other town. A second season as a ski bum, this time in Park City, hadn't panned out. There'd been no snow that year, so no ski. Just bum.

I ended up back in the garlicky little beach town of Del Mar, California, drawing horse portraits and designing youth soccer logos, when out of the blue, I got a call from an old friend whose uncle was hiring up in San Francisco. We packed up and moved, first to Burlingame, by the airport, then to a Mondrian-inspired apartment on Potrero Hill. My friend left after a few months, but I stayed on. I had fallen in love with a city for the very first time.

I was on my own, welding in a free-standing fireplace factory in Hunter's Point by day, surrounded by noxious fumes, surly illegals, and the odd furloughed worker from San Quentin. By night, I made the rounds of particular nightspots. I was still too young to drink legally, but Montana had taught me how to order up with the proper attitude, so it was never a problem, getting in, getting served. Especially in North Beach, where I could catch Stan Getz at Keystone Corner, or last call at Gino and Carlo's, The Saloon, and of course, Specs' - the famous Adler Museum, with an optometrist's sign, tucked in an alley just under Pacific Street. (Before the city felt compelled to name that alley after William Saroyan)
The big, round table at Specs' was always lively just before closing, with guys named Gary and Larry, Leon the Cabbie, and John the Painter, some of whom were apparently quite famous, some decidedly weren't. They were just the guys at last call for me. I was, as usual, the youngest. We traded quips and opinions; poetry and pontifications, until Specs hit the lights – and out we'd go into the fresh night air.

It seemed a little odd, living the high life low, or the low life high in San Francisco. It always smelled so fresh and clean, even with the stinkiest stuff on your breath, or on your conscience.

I spent a lot of my free days there in North Beach too – picking up salamis at Molinaris; having coffee at Puccini or Trieste. Sitting up on the riser at City Lights Bookstore, discovering Ginsburg like you're supposed to there. I picked up my first Sam Shepard, and continued to devour Steinbeck and Vonnegut, the beta magical realism of Tortilla Flats and Breakfast of Champions sending me away south to Marquez and the South Americans. I discovered some Czech roots, stumbling across Milan Kundera, and pouring over it in front of the bookstore's picture window, under the watchful gaze of Carol Doda's neon nipples that flashed kitty-corner at The Condor Club.

Alone, and participating in such a seemingly common life, it never occurred to me back then that I was manufacturing any memories. Just free-standing fireplaces.

That sparkly, dreary day though, a memory was making me. I'd seen a tiny photo, like a postage stamp, in the Chronicle the day before. It was a mysterious shiny black figure, wielding what appeared to be a neon sword. There was a little announcement of this film screening up at the Coronet theater on Geary street, scheduled for noon. I had nothing planned for that Sunday, so taking my youthful hangover to the movies sounded healing.

Driving by the theater, I passed a short line of wet attendees standing out front, movie-goers in the mist. Mostly guys a little like me. I joined the queue strung along the unprotected theater façade in the light rain, collar up, hands in my pockets, like everyone else. No one said much, getting wet and feeling a little dumb...what is it? I dunno...I heard it was...saw the picture in the paper…

They ushered us in, and I don't remember any fanfare or trailers – maybe just a brief announcement that they were screening a new film before it's release. What I do remember is that first impression – an expository serial-like text scroll vanishing into space, followed by the interminable rumbling of a gigantic I didn't know what – apparently a spacecraft passing overhead as the film began, and the collective "whoah" breathed out by the seventy or eighty soggy witnesses. The theater had recently installed the new Dolby Stereo sound system, and the bass hummed up through the seats.

When it was over, they ushered us back out. I remember us all smiling and nodding to one another like a pack of stupefied nerds. Exactly like that. We were handed some flyers, or questionaires, something you bet I wish'd I'd kept but didn't think to. I wasn't thinking of much, other than what I'd just witnessed. A new, updated action genre. Classic, even eternal themes. Alec Guiness. It was a really terrific movie – no question about it. Especially coming from the American Graffitti guy.

I doubt that any of us realized what we'd just witnessed. I sure didn't. What it would mean to our world. What it was to become to a culture of people who spend their lives staring at screens, wishing they could lead other lives. I, and seventy or eighty damp Bay Area compañeros, had born witness to George Lucas' first public screening of Star Wars.

The book: How to Survive Life (and Death), A Guide To Happiness In This World and Beyond is now available everywhere, but ask for it it at your local bookstore!
Posted by rjk at 8:15 PM