Tales of the Koko Lion: The Vibration of Cheese 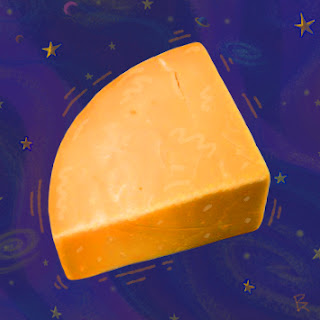 "Split a piece of wood; I am there. Lift up a stone; you will find me there."
Yeshua, Logion 77, The Gospel of Thomas

The light energy that issues from the Source constantly penetrates and energizes all that we see. Our selves, and everything that interacts with us in this form we're in now, are made of light and electromagnetic wave energy "precipitating" as matter, bound in energy fields in constant motion at a subatomic level, emanating from the "Zero Point Field." Nothing new there, right? If the rules were to suddenly change, we might fly apart in all directions, or plunge right through the floor. Sometimes, I'm not sure what's holding me together. Maybe pizza. Or more likely, it's the cheese. God bless cheese (artisanal sourced, and vegan, of course).

This light of what Hindu and Christian scripture call "I AM" shines through everything, making everything perceivable within the limits of our vision. Some physical forms are more transparent, more porous to the Source, dependent on their material structure, and particularly on the density of the intellectual thought form we use to define them. An anvil's slow solidity speaks of it's purpose and symbolic nature. Source doesn't pour out of it, it oozes through. But it's there, in everything, whirring about in it's own sub-atomic composition, vibrating. Our shared consciousness allows us to agree on the form of the anvil, and our co-creative powers; discovery, intention, focus (all thought-forms), and manifestation (creation), bring the anvil into being in it's appropriate form. Some guys make anvils. In cartoons, we agree to manifest anvils in order to drop them on cartoon characters heads, while in our conscious form reality, this has pretty disastrous consequences. These are different density thought-forms.

The formation of metals is a powerful example and metaphor, inevitably leading to alchemy. The transmutation of form into Source. An example of this are words – marks with meanings we agree upon; and the forms they take. Painted on a wall. Carved in granite. These particular ideas here, as word-forms pressed on solid paper, could be bound as books and have a presence and solidity as such. But words like these that appear digitally don't manifest themselves as solidly as those that are settled on paper. Even "classic" literature realized digitally doesn't have the impact of the same thing on paper – it simply lacks dimensional solidity. The bits of agitated information don't land on the cortex so much as they jitterbug through it. That's why internet ideas are more contentious than those printed on paper, and why paintings sit much easier than TV images (more on right/left brain later...). Those forms turn to gold more easily.

In the same way, nature is always more permeable to source energy than man-made materials and environments. Illuminative energy pores through nature's delicate membrane of being with much more ease than it does through buildings or other man-made objects. (Not only is this a fundamental reality of observational mystical wisdom, but living things actually emit a measurable amount of light. Interference of these holographic waves is the basis for Magnetic Resonance Imaging [MRIs], and may account for flocks of birds and schools of fish moving simultaneously). This is why it's important to spend time in nature – to bathe yourself in the source energy of The Divine that shines through the thin veneer of nature's form.

This is also why some people seem to shine, while others seem dense and pallid. Some people are composed of denser, slow-vibrational thought-matter, while warmer and livelier people vibrate closer to the frequency of source energy. Source is the source of higher attraction. This isn't an excuse to form subjective judgments- people in trouble may shine brightly (and vice-versa), based on their surface vibrational frequency at that particular moment. You might "read" their true state through their shine, then see them later, now knowing something's amiss. Their shine has now diminished. For example, drug and alcohol abuse can momentarily cause a false shine, that inevitably (and often permanently) fades. Slower vibrational thought-forms can create lower attractions to the "like-minded" (similar thought-formed).

And so, these perceptions are a function of your own state. Life is a mirror. How you are feeling- the frequency at which your thought-forms manifest the state of your senses, actually elicits your perceptions of the world. You are constantly creating your own world. Life doesn't happen to you, it happens for you!

You can train your vision to bear witness to these differences simply by closing your eyes in meditation, and visually entering that place where all illumination emanates from. It's right there – right inside. When you return and open your eyes, you can actually see the illumination issuing out of people, through their faces usually – in personal in varying degrees, based in their karmic energy. This will also help you to recognize the wonder of source energy (which is Love!) in everything, and the world will mirror that love for you.

"Our present world is conditioned by our present mode of consciousness; only when that consciousness passes from its present dualistic mode...will the new creation appear, which is the external reality of which our world is a mirror."
Bede Griffiths

"As you think, so you are." The Buddha

The latest book:can be ordered online; and the first book: How to Survive Life (and Death), A Guide To Happiness In This World and Beyond is available everywhere too – but ask for them it at your local bookstore!
Posted by robert k. at 11:58 AM