Here's the rock, and where the deer were... 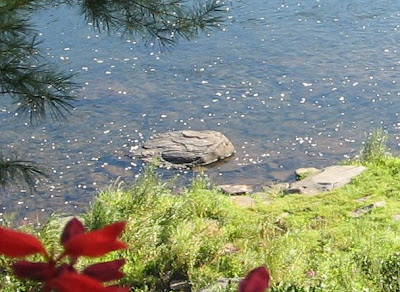 "The little space within the heart is as great as this vast universe. Both heaven and earth are contained in that space...for the whole universe dwells within our heart."

One day, Koko was sitting on the rock in the river, chanting the sacred word OM. It seemed a little corny, sure. But it was working. He said the word over and over, from his root and his heart and his throat. His eyes were a little bit completely closed, though he was beginning to see things quite clearly, in a different way. After a while, he felt a presence, and cracked his eyes slightly to look. There, on the bank just across from the rock, were three young, curious deer -just five or six feet away. The young leader looked like: Is there room on the rock for me? I'd like to step across. There wasn't enough room on the rock, but in their hearts, there was all the space in a thousand universes.

Have you ever heard of The Unified Field Theory? Physicists have been working on it for a hundred years, at least. But there's one major ingredient that they keep leaving out of their formulae: Consciousness. The deer, the river, even the breeze on Koko's face (even Koko), are drifting particles, realizing their material forms in and out of wave phases. Some things just are, formed out of our shared consciousness. Some things are just for you, formed from the energy of your heart, which is like a giant light-energy top, spinning in the middle of your being. In fact you could say, it is you.

Live from your heart. Release all the expectations you have for the things you want. You're getting everything you need already. You don't have to go any where else to be where you want to be. Or try this: get on the bus, go across town, sit in a new cafe, open your heart, and be half way around the world, in the most beautiful and romantic place you've ever wanted to be. Covet what you already have.

"The whites always want something; they are always uneasy and restless. We do not know what they want. We do not understand them. We think that they are mad."

I asked him why he thought the whites were all mad.

"They say that they think with their heads," he replied.

"Why of course. What do you think with?" I asked him in surprise.

"We think here," he said, indicating his heart.

""The heart is a sanctuary at the center of which there is a little space, wherein the Great Spirit dwells, and this is the eye...by which He sees all things, and through which we see Him."