Is a Cultural "Anti-Christ" Bringing the Real "Rapture?" 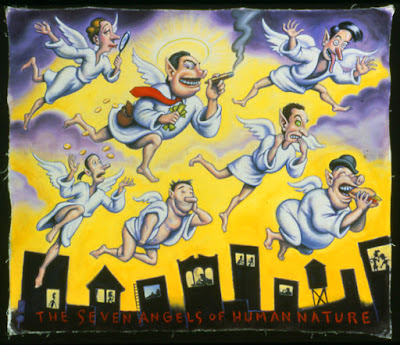 We're a little like moss on a rock here on earth – a simple colony of life. In the same way that any collective life form experiences stress when the conditions for it's survival begin to change, our world is beginning to experience the very real stress of climate change, species extinction, environmental degradation, income inequality, and the spread of unsustainable lifestyles based on exploiting the planet. For all of us – as well as for each of us – there's a need to adapt. The destruction driven by blind predatory capitalism leads to the weird conflations of "patriotism" and religion, self-defeating delusions we see in the ugly ironic examples of market-based "winners," and "christians" supporting diabolical perverts and criminals because they are leading us to "The End of Days."
Much of this grows out of a serious flaw in our culture's perception of Darwinism, which is not about "Survival of the Fittest," but actually about Survival of What Adapts in the Most Cooperative Way. What is it that carries us through the tough times, with Love?
It's an altogether different definition of fitness. It's a spiritual fitness, based in a spiritual context – answering our human problems with the recognition of simple, spiritual answers. It's about real, quality survival.

For example, the biggest, meanest guy may clobber everyone who disagrees with him, take all the food, and force himself on the prettiest women; but his karma (created by ego and fear) and the failure to evolve spiritually in a world of expanding consciousness, will cause his destruction (sex specificity intended) – a genetic dead end. The richest guy may have the most secure, most isolated fortress, the largest vault of canned food, and the most guns and ammo; but his isolation and fearfulness will lead to spiritual atrophy, and the inward collapse of his shrinking world. Those attributes and characteristics that are associated with Power and domination are dying out, as those associated with Ethics and compassion are on the rise. Life on earth is always adapting – the parts that don't adapt, don't last on our biological time-table.

Hard times stress the colony, challenging it, forcing it to change; and now we see the shape that change is taking. It's like breaking up bad pottery, and soaking it until it softens and becomes the clay that forms the basis of real life, in order to start over. People are coming together to re-configure their world on that basis – what's actually real and important in life; inspired by a sudden common awareness of what the management of Earth's abundance actually entails, and what the real consequences of continued unconscious exploitation is leading to.

A new cooperation – an evolution –  is exploding into reality, based on the spiritual unification of humankind, facilitated by the internet, manifested in an expanding sense of a global community, called to action by the impending catastrophe of climate change. The explosion in clean energy, expanding cooperatives, reuse and recycling, uncontested environmentalism; the elections of Obama, of women, of representatives of diverse religion and ethnic backgrounds; and the impetus for universal health care, local food production, the accelerating growth of animal rights awareness, vegan and vegetarianism, social support systems of all kinds – as well as the public momentum to institute these ethical concepts by means of regulation and legislation (a result of the rise of destructive fascism in the world), is the shape of the change.

Extremists and fundamentalists – religious, financial, racist and militaristic fascists – are dividing themselves off from the majority of peace-loving, compassionate humans, and defining their differences in preparation to be shed from the whole. They actually constitute just a small part of the world's total population. The rise of climate-denying, pro-corporate racism and fascism actually marks the end of their world. It will be a little messy, but it's happening.
Do everything you can to help it along. If you open your heart, you'll intuitively know what that is. You'll know how to behave, how to shop, how to contribute, how to vote. You already do.

In a manner of speaking, a kind of biblical "Rapture" is actually taking place now amongst those who are awakening to this new consciousness, many of whom are experiencing hard times, and finding themselves and their neighbors falling through the same cracks in the system that allow spiritual evolution to enter. These are fractures in the false world of materialistic consumerism, and a dis-identification with a media that's destructive by corporate design. The Christ Spirit that's returning isn't the bearded redhead in the paintings, it's the spirit of Ethics, Cooperation, Compassion, and Love.

Those who want it all, who think they have it all, who are trying to get as much as they can, and will do anything not to lose it; who want to prevent change and "make things great again" – who suffer the delusion of their superiority and entitlement – who think they can will the truth to be what they want, are fast being "Left Behind" in their spiritual morass, a private hell of their own making. But they won't remain here suffering while the blessed 80% ascend to Heaven – they'll simply become redundant. Their hateful opinions will hold no sway. Their methods of fear-mongering will become ineffective.
Your biggest job may be to help those you know and care for, who've been compromised by fear-mongering, to catch up to the change – by generously applying Love and compassion.

Heaven will return on Earth as we stop poisoning it (because we must), restore natural balance, use free energy, distribute the earth's resources equitably, and evolve into our truest "Divine State" of spiritually unifying our global human family. The balance is returning as it must, and if you're part of that change, you needn't worry about the hard times. What truly matters is what each and every one of us keeps in their heart – just be sure it's Love.
"Our present world is conditioned by our present mode of consciousness; only when that consciousness passes from its present dualistic mode...will the new creation appear, which is the external reality of which our world is a mirror."
Bede Griffiths

Read about this and much more in:available direct on this page, or online. The first book: How to Survive Life (and Death), A Guide To Happiness In This World and Beyond is available the same ways – but ask for it it at your local bookstore!
Posted by robert k. at 1:19 PM