Taking it Easy in the Isn't-Matter-World 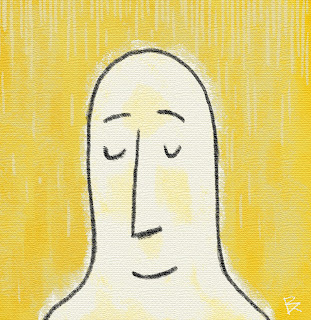 The ocean pours through a jar, and you might say
It swims inside the fish!
This mystery gives peace to your longing,
and makes the road home
become home.
Rumi

Yep, sometimes it’s a challenge just to take it easy.  This world does assault us. This world makes a lot of demands on us. But then, which world is it that asks so much and gives so little, and which world is it that really gives us everything (and maybe even more, if we let it)?
Any major Buddhist will tell you that the world of material attachments is an illusion, composed of a constantly changing—constantly coming and going—surface “reality.” What we think we need often turns out to be not what we thought we needed at all, and it’s all because of what we’re thinking. It’s because we’re usually making things up.
So, okay, it’s not really real…but then it is real, isn’t it? It just isn’t always too reliable, and a lot of it doesn’t come when we want it, or stay as long as we’d like.

This world is a made-up world. It’s made up of outside appearances, of important occasions, of accelerating schedules, of stuff you have to have and stuff you have to do. But all of that stuff comes and goes, and often it’s just fine when you realize that you forgot all about it, until it was too late. Oops! I missed it!...and it doesn’t even matter that I did.
That’s the world we usually think really matters—the world of matter. That’s the world that’s so alluring, so demanding, so unforgiving. The “matter-world.” The world that you usually forget about (the one you take for granted) is the one that’s always there, but always sort of underneath everything. That’s the world where everything of real importance actually comes from. It’s the (often invisible) world that doesn’t change.
It’s the Isn’t-Matter-World.

The Isn’t-Matter-World is the world of beautiful ideas that never go away, that stick with you until maybe you bring them into the material world, if you really want them there. It’s the world of Love, which is the deepest fundamental connection and motivation we have for everything of real value that arises in this life. It’s the world of miracles (like this miracle we’re all participating in, in every single instant).

The deep river water under the ice is the real, unchanging world of Love, of Art, of wonderful ideas and miraculous synchronicities—like meeting each other, or doing something really nice for someone else. It’s a world of elemental innocence, of compassionate connectedness, and of the awesome power of true humility that flows through everything of real value and beauty.

Skate lightly on the material surface, and know the deep river water-world is running through you. Live in that world, showing up (with an open heart) for the easy-does-it demands of the ever-changing surfaces. Then, the Isn’t-Matter-World will carry you in it’s flow.

Rumi by way of Coleman Barks