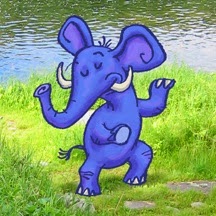 You don't see many blue people around. Or on the other hand, maybe you see a lot of them. The blue people (who actually are blue) mostly live in one of our imaginary worlds, like the cat people in the movie Avatar. Or the shapely, shape-shifting mu-tant in the X-Men movies. The Blue Man Group, or Smurfs!
All the other blue people we see, the ones who just feel blue, usually feel that way because their minds have been cast into some sort of sadness. Such is Life.

There is another well-known blue man, probably the original, and that's the Hindu deity Krishna – an incarnation of the spiritual preserver and sustainer of our Universe, Vishnu. He is God as an avatara (the origin of the movie's title) in human, albeit blue human form. In the amazing Hindu scripture The Bhagavad Gita, Krishna appears on Earth as the chariot driver of a confused warrior, and takes the opportunity to instruct the poor fellow about how to best occupy his human form in this life. He simply teaches him all about life. It's like having God as your cab driver in New York City.

Body
Sporting a beautiful blue body is obviously unusual, which is no doubt why Krishna picked it. It's quite likely that you'll pay very close attention to everything that comes out of a beautiful blue persons mouth. The first, and most obvious point it makes is that our bodies are simply vehicles that can be colored differently, like cars. And Krishna is very clear when he talks about our relationship to our bodies:

"The body is mortal, but he who dwells in the body is immortal and immeasurable."   Bhagavad Gita 2:18

"As a man abandons worn-out clothes and acquires new ones, so when the body is worn out a new one is acquired by the Self, who lives within.
The Self cannot be pierced by weapons or burned by fire...cannot be made wet or dry. It is everlasting and infinite, standing on the motionless foundation of eternity."
BG 2:23-25

Listen up, because here's what's so important about all this. It means that we are a race of energy beings assigned to living in these human bodies, surrounded by a world of changing forms. We are truly one race, with or without the bodies – that's why human racial distinctions are so antithetical to our truest natures, but are also so necessary for pointing out our shared underlying reality.

It sounds a lot like science fiction, doesn't it? Well, that's one of the big problems with our limited human perception. We tend to want to think of it in terms of science fiction, because that's the funny, "self-protective" twist our body/minds use to label the spiritual facts of our unusual existence. Within our truest self – our shared being – of course we know it's true. Even "skeptics" know it. If any one of us has realized this, there's a very good chance that everyone may realize it too.

I know because I'm a person who's had multiple near-death exper-iences that eliminated whatever choice I had. It usually takes something to help you get it, just listening to an imaginary blue guy may not be enough. You can gain some real understanding through deep meditations, or by taking the testimony of certain teachers to heart. You may also tell it's true by the simple fact that your inner spirit – your inner experience of life– never changes all that much, while if you're anything like me, your body keeps changing whether you want it to or not.

Mind
If our spirit is animating our changing body, then what, exactly, is our mind? Generally, I think it's what I think with, but body-wise it's really my brain that's doing that. My thinking organ. My mind seems to live in three different ways: The part where I learn and apply knowledge – my "rational intellect." Observing, comparing, labeling, analyzing, planning…all that. Then there's a reactive much less rational part, which is unfortunately often fearful and opinionated. That's the part we usually call ego – our kind of fussy (sometimes neurotic) interface with Life. Hindu yogis call these aspects of mind "chitta." They function in the realm of the seen and known.

But then there's that third way my mind works – as all the things I know but have never had to learn. Everything I just know. That's a deeper kind of shared, instinctual mind – an intelligence that doesn't change, and accepts life in what ever form it takes,  without labeling or judging. This part of my mind just is. I don't make it up or change it, I access it. Yogis call this "purusha." Where the mind functions in the psychic realm of the spirit. What's largely unseen, but very deeply known and felt.

This more shared, less individual form of intelligence can be difficult to recognize because it's so natural, so unconscious. How do I even know how to walk and talk? Or when I'm going to laugh? Or what is really to be feared (and what will probably be okay)? We all share all that rather critical information, that "common sense," without really having to think about. It doesn't matter whether we're yellow, or red, or blue.

Now notice the similarity, even the simultaneity of our shared mind and all it's little parts, like say, the next time you're standing in a slow-moving line at a bank or in a store. If you could hear the thoughts of each person in line, it would sound like a chorus of complaints in unison. First the rational intellect: If they opened another window, they could take care of all of us in a much more efficient manner. Then, there's the ego: Doesn't anyone here know what the hell they're doing? I can't wait in this line all day!  Then there's our shared mind, our "common sense:" I'm either going to do this now, or some other time, and now is the only time things actually happen.

While the first two "personal" forms of mind lead us to believe we are in control, the third, shared form, is evidence of a much deeper reality where, as Joseph Campbell put it: "We don't live life, life lives us."

Then there's this too – we are subject to the ways of the world, which, like each of us, is comprised of all its parts, demanding, contributing, reflecting. It's another even greater body/mind in which we all share – the mind and body of our planet and it's inherent cumulative intelligence. Its life. You may have heard it called "Gaia."

Astrologers recognize this form of the spiritual occupation of the planets, and the greater life of the cosmos. By spiritual fact – not by science fiction – we are a part of that greater shared intelligence, expressed by what we, as riders, demand from, and contribute to, the body and mind of the living Earth. Sometimes it's an easy ride. Sometimes not. We learn what we can only learn by riding on our planet – and it doesn't matter if our planet is yellow, like Venus; or red, like Mars. Or, like the body/mind of our Earth, if it's blue too.

"In this world there are two orders of being: the perishable, separate creature and the changeless spirit. But beyond these there is another, the supreme Self, the eternal Lord, who enters into the entire cosmos and supports it from within."
The Bhagavad Gita, 15:16,17


The book: How to Survive Life (and Death), A Guide To Happiness In This World and Beyond, based on lessons (learned the hard way) by a three time near death survivor is now available everywhere – but ask for it it at your local bookstore! The latest book, How to Get to Heaven (Without Really Dying) is available from Llewellyn Worldwide or by contacting Robert directly.
Posted by rjk at 6:28 PM