Politics & Family – Cognitive Dissonance, The Stockholm Syndrome, and the Challenge to Cultural Evolution 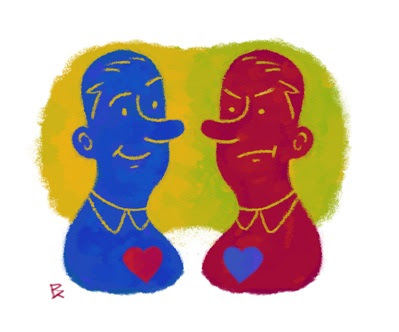 If we're ever going to resolve to face the problems of our increasingly divided planet, we'll have to get busy right away. The biggest problem we face isn't just with wealth inequity and the "one percent" we rarely see, it's with the twenty-seven percent of our fellow citizens we know quite well. In fact, some may be friends or family members we must constantly interact with, and it's a real challenge to confront deep pathological divisions with those we ought to love the most.

It's pretty clear that the obstacles preventing cultural equanimity and responsible stewardship of our country and our planet are generated by multinational corporations, whose financial power is based on perpetuating destructively anachronistic systems of resource management and social division. That's quite a mouthful, isn't it? Toppling the entrenched power structure would be a lot to bite off all at once, and couldn't be done quickly without making a real mess, so what's the most expedient way to go about it?

Saying that it starts with you and me may sound silly, since we probably all started changing a long time ago. The real problem we have is in convincing all those beautiful people that don't agree with us. People who for some crazy reason seem to think fascism and environmental destruction are good ideas. Let's start with some awareness about what we're up against, namely certain difficulties that are part of human nature.

Cognitive Dissonance is the official name given to that sad tendency of people to join in efforts and opinions that are actually harmful to their own circumstances, usually to allow them to dissociate from uncomfortable truths. It's kind of a volatile [and dependable] character glitch, and as such is often exploited. Patriotism, religion, racism, xenophobia, financial and sexual insecurities are all activators of Cognitive Dissonance. So you see Washington think-tanks and Wall Street corporate advertisers using them aggressively, and very effectively.

"Ignoring one's...self-interest may seem a suicidal move to you and me, but viewed in a different way it is...a sacrifice to a holier cause."

At it's worst, in terms of the political divisions in our country, Cognitive Dissonance can engender "The Stockholm Syndrome" – the pathological identification of a victim with their tormentors. A 2007 FBI Hostage Barricade Database study indicated that in 73% of abduction and kidnap cases the victims did not develop Stockholm Syndrome, which leaves a very substantial 27% subject to the irrational, self-destructive tendency to side with their exploiters. Not coincidentally, that's quite close to the number of people who identify themselves as Republicans. If you don't, you are part of the substantial 73% majority. (See: FBI Law Enforcement Bulletin, 7/2007, Vol.76, #7)

But what can we do we do to change those minds? You know that when you try to convince someone they're wrong about something obvious, their Cognitive Dissonance kicks in, their warped defenses arise, and there's little chance of moving them an inch. In fact, they feel even more strongly that they are right, and though you may be sincerely trying to help, they become even more convinced that your intentions are subversive and threatening. Unfortunately, a lot of human beings operate from that fearful dynamic, that "partisan pathology." It's a destructive mental illness we haven't quite figured how to cure yet, but the original designers of Fox News, and generations of Republican operatives to follow, have perfected how to manipulate it through ever more media outlets.

So we've got to take a careful, even therapeutic approach – a healing approach; and as healing is a spiritual activity, when we talk about "cultural evolution" we're really talking about our mutual spiritual evolution, which is the source of all the solutions to our deepest challenges. That's where it does start – with just you and me. In short, we use Love, and Time – Compassion, Honesty, Forgiveness...all that good stuff.

Even though a friend or family member has identified with destructive, irrational influences, we do still share mostly common ground with them. Kindly, calmly maintain sane boundaries – stand your ground – but never engage in the energy of confrontation. Let them be right if they need to be, and often in that quiet moment of irrational "victory," the folly of their delusion resonates uncomfortably and gives them a chance to realize the power of your point – that the fault really comes from a manipulative third party that they don't have nearly as much in common with as they have with you. But it all takes time – we can't rush it.

Practice restraint and let things go; but be reliable – Show up for family commitments, remember special occasions, be available to help – expecting nothing in return. Sincerely be there for them (without ever being patronizing), as though it were for a person you were helping recover from a painful injury. Make your arguments subtly, by personally demonstrating that your point of view reflects good character in every other facet of your life, aside from your politics or philosophy.

Caring, consistent, and compassionate action will support any point you want to make much more effectively than a documented factoid or a raised voice. If you can be an example of reason and sanity, then the 99% of what you have in common will solidify in their experience. When we're not trying to win, the calm understanding and honest, fact-based considerations we occupy carry the profound power of a more truthful engagement in life, on every level. The real insanity becomes much more obvious, in comparison to the sanity grounded in spiritual principles.

Ultimately we are dealing with the pathology of trauma and dissociation which is such a profound part of every persons personal karma, which cannot be changed from outside the troubled soul, but only from within – through that person's awareness. Only by applying your own awareness of these complex issues with compassionate identification (life is hard for everyone), soon you may be surprised to find that generosity of spirit can enter the heart and mind of the very person who was at one time so vehemently set against you. With that we might "occupy" the Red States, the less fortunate, the middle class, the upper middle class, the Independents, the "moderate" Re-publicans (are there any left out there?) We might even occupy "The Right" and the 1%... After all – we are all the same thing: the large 73% majority of heart-based "Radical Left-Wingers."
In the meantime, VOTE like all Life depends upon it!

Here's an excellent article on Cognitive Dissonance and the Stockholm Syndrome by Dr. Joseph Carver