Pt.2: The Maya of Religion (Essene but seldom heard...) 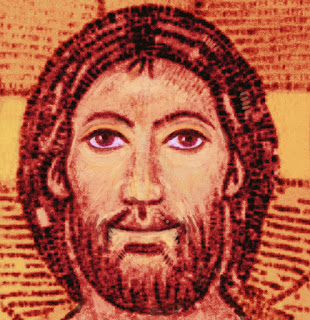 There are lots of obstacles to Enlightened Consciousness inherent in this human form, most of which are created by a level of unconsciousness that will never allow that goal to be reached. We struggle with these obstacles, usually not recognizing them for what they actually are, often denying their very existence – so it's necessary to show great care when pointing them out, lest we ruffle some feathers. Of course, some feathers probably need to be ruffled.

Presenting abstract or hard-to-grasp concepts of self-realization to people has often led to the invention of elaborate mythologies that end up permanently concealing the simplest, most effective truths. The beauty of the core teaching can be obscured and subverted by human ego, and it's pathological need for control. This leads to The Maya of Religion (of many religions really) illustrated in this "passion play" example of the early Church of Rome.

Prior to the inception of the Church, it's fathers saw the influence and potential of "Gnostic" post-Hebraic Eastern–influenced mysticism, like that possibly taught and practiced by an Essene Master, Yeshua, throughout Egypt (where he may have likely studied), into Asia Minor, and then upon his storied return to Judaea.

The Essenes were a wide-ranging sect (or sects) of Hebraism, whose communal inns where all were welcome were the inspiration for modern hospitals. They fed and healed anyone who needed their help. They celebrated meals. They practiced advanced hygiene, and herbal medicine. They were strictly vegetarian, and disapproved of the taking, or disrespecting of any life. They wore white. They were into foot washing and massaging (feet were especially important back then). Love and service was their rule. In short, they were the christians before Christianity. It is from this school that Yeshua came. The Gospel of Thomas, quoted above, is one of their texts.

Hebrews, and Pagans, weary of the politics, corruption, and barbarity of Jerusalem and Rome, were very likely hungry for the Alexandrian synthesis of Eastern mystic "religion," like Buddhism, The Bhagavad Gita, and The Tao te Ch'ing that traveled the road from Egypt to India; mixed with the simple wisdom of the Ten Commandments, and consciousness expanding practices as taught by Yeshua. This wisdom from the east taught that The Kingdom of God was to be found within each person. That "heaven" was here and now – accessible to anyone, based on personal realizations of transcendent unity, or gnosis. It became the heart of the Gnostic (Essene, Ebionite), or Nazorean teachings, and it became quite popular.

Over the next several hundred years, the shifting power base of the Roman Empire systematically usurped and subverted the potential of this Gnostic message by cobbling together a synthesis of their own: They consigned the Feminine Divine to a subservient role; they fashioned a mythology from existing mythologies, replete with a ritual life that only they could administer – the Eucharist; and they synthesized the appealing aspects of numerous competing religions by styling messianic narratives for each group of potential followers whose ultimate message established the deadly authority of Rome. They even aligned popular holidays of pre-existing religions to their version of "Christianity." They began a ceaseless campaign of genocide against "heretics," and of scriptural suppression, effectively removing The Essenes and their texts from Western history.

This inexorable reconstruction project guided it's mostly illiterate followers along a "Path to God's Kingdom" controlled by an organized elite. Spiritual seekers were directed to take part in a tailored mythology – a kind of occult hall of mirrors that continues today – The Maya of Religion – full of constructions that conceal and subvert true spiritual discovery, limiting it to a fraction of it's potential. The Church parcels out the benefits of the underlying spiritual wisdom with corrupt or unconscious authority, forcing their adherents to accept the most egregious offenses of material humanity; politics, war, slavery, money-worship, sexual predation and pedophilia. Ironically, from it's own central text the truth comes, to paraphrase: "You shall know the tree by the fruit it bears."
This post-Christmas Tale is the story of the wealthy, corrupt—yet for some, spiritually irreplaceable—Church of Rome; but the recipe for The Maya of Religion described here has been applied many times through the ages, and can be clearly seen in more contemporary examples, in fabricated religious myths and dogma like those found in Scientology, or the anti-Essene versions of Christianity that replace humility with a prideful lust for material "superiority."

It's a testament to the illuminative power of the true light that shines through all that dogma and artifice – that even though it's potential is seriously stifled, the little bit that escapes this vacuum of delusion can still be enough to inspire profound spiritual transformation to take place. Direct inner, "mystical" experience has always provided this solution to the conundrum posed by institutionalized religion.

The compassion and unconditional Love that gives us a connection to the Divine. Faith without works is dead. Showing up for one another. Releasing the false attachments of material desire. Entering into transcendent union though the means of self-examination and meditation. The silent surrender to the loving Universe, and the power that grows out of it – out of what Mahatma Gandhi called ahimsa – absolute non-violence. The powerhouse of Love to heal the rift between the two – Ego and Spirit, as taught by the Essene Master, Yeshua (...whose true story can only be found in your own heart).

"Yeshua said: If two make peace with each other in this one house, they will say to the mountain, 'Move Away,' and it will move away."
Logion 48, The Gospel of Thomas

How to Get to Heaven (Without Really Dying), Wisdom From a Near-Death Survivor, from Llewellyn Worldwide, and the first book: How to Survive Life (and Death), A Guide To Happiness In This World and Beyond. Both are available everywhere – but ask for them at your local bookstore!
Posted by rjk at 1:37 AM