Tales of the Koko Lion, Part 13: Simon of the Marquesas, conclusion...

"A long time ago, I met a girl while I was fishing in the lagoon on the other side of the island," he said as he waved over the ridge, "...and she had my child.  But back then I thought life was only about Simon, so I left the far lagoon and returned to the village." He narrowed his eyes and looked out past the horizon. "There I met another girl, a wild one, and went to live with her. She wanted things, so I went to work on the copra boats – there were many more of them back then. I sailed all over and made money, and spent it all on my life with the wild village woman."  He shook his head sadly, looked up into their eyes, and began to turn a little magical.

"One day I was fishing in the lagoon, and a shark swam up to my boat and he began to talk to me.  He said: 'This is no way for you to live. You will never be what you are meant to be living your life this way. You must return to the far lagoon, to the girl you left. She is there – I saw her the other day, she is raising your child.You must go back and live there, and take care of your family.'  But how can I take care of them, if I do not work the copra boats?  I asked him. Il a me dît: 'You will fish in the far lagoon, and you will carve tiki to celebrate the gifts of a true life, and that way you will be able to take care of your family.'  Then he swam away."  Simon seemed to be telling the God's truth.
"So I left the village woman with all the things I had bought her, and returned to the girl in the far lagoon, and our child, and we had more children.  And I took care of my family," he looked around at the kids emerging now from everywhere, smiling, "and I still do...and these are children of those children's children!"  He laughed and showed the kids off, and they laughed too.

At that very moment, the Aranui's first horn bellowed out over the bay.  Koko asked "How much is the large tiki?" and I think Simon told him two hundred francs, which was only about thirty dollars then, but  Koko hadn't brought along any money at all. They said their goodbyes, gave Simon a hug, and hurried back down the hill, but by the time they reached the shore, they knew they had to go back for that tiki. The other tourists were already in the whaling boat. Up to their thighs in the surf, Koko and Grace took up a collection. The woman who'd won a lottery in Ohio lent them the two hundred francs, and they ran back up the valley together in case if they were left, they'd be stuck together for the month until the Aranui's return.

When they got back to Simon's shed, he was waiting for them. The second horn sounded from the ship below. "I knew that you would return."  He laughed. " This is your tiki. You had to come back for it."  Koko picked up the heavy stone, and felt it's energy charge up his arms and fill his heart. Grace felt it too, standing next to him. They paid Simon, hugged him goodbye again, and Koko folded the tiki into his arms and headed back down the hill, Grace running out in front to hold the boat at the shore, if she could. 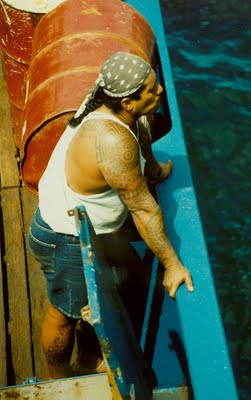 By the time they got back to the beach, the crew members were waving them in frantically. The seas had picked up, and it was tough clamoring on board, and even tougher rowing out through the surf.  As they pulled up alongside the ship, the waves were pitching the small boat up and down eight or ten feet.

The crew always boarded the paying passengers first, and one of them snatched the tiki as two others hoisted Grace and Koko on board at the top of a wave. They looked back at a worried island woman and her new-born, still being pitched up and down in the boat alongside. One of the rowers took the infant in one hand and raised the little one up overhead with the rising wave. Then, in a magical moment as the wave reached it's peak, a brawny crewman reached down from the Aranui's deck, and as securely and tenderly as you'd pick up a perfect peach, he took the baby with one hand and passed him to safety. On the next violent wave up, he grabbed the mother by her outstretched arm, and as though she were as light as straw, lifted her straight up and on to the deck. They handed her baby back to her as if such things took place every day, because here- of course, they did.

The crew were, to a man, incredible physical specimens. They hoisted and stowed the whaler with easy dexterity. One of them ran like a cat along the railing, despite the wallowing seas. They were some of the most amazing fellows Grace and Koko had ever seen, and every night on the top patio deck, where the free passengers slept under the stars, they brought out their guitars, tiples, and spoons, and sang the most beautiful island melodies.

Koko was thinking of Simon, of his color-of-the-lagoon smiling eyes, as he tried to explain the bomb-shaped volcanic rock past the skeptical Customs officers at L.A. International.
It seemed then that being with Grace would always be, so at the time he failed to pay proper attention to Simon's story of responsibility in love. Likewise, he failed to fully grasp the allegory of the empty materialism of the village woman, and true direction in the words of the shark-spirit, until many years later. He never saw the stone again, Grace kept it when they parted, but he never forgot it's weight, the stone carver's hut, the handing of the baby, or that enchanted night music under a million stars, rolling over the violet South Pacific, the Southern Cross slowly laying over on it's side.

"Life can only be understood backwards,
but it must be lived forwards."
Søren Kierkegaard

The book: How to Survive Life (and Death), A Guide To Happiness In This World and Beyond is now available everywhere, but ask for it it at your local bookstore!
Posted by rjk at 1:32 AM