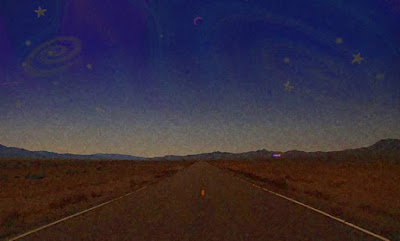 "Wherever you go, there you are." Thomas á Kempis

The traveling started early. Perhaps it was the expansiveness of the west that brought it on. Or maybe just the desire to be somewhere else that living a young life kicked off it's tracks can bring about. Having Mexico, an international border, right down the block added a bit to the scope of what seemed possible. There were fronteras close by that could be crossed in minutes. Horizons one could easily wrap one's life over in just a day or two's time.

There was that inner expanse too. The invitation to live a multiple life that in fits and starts led me to an identity that I'd rely on through several lives, and several deaths. Back then, I didn't know where I was going in life, so I felt most at ease when I was going somewhere else. The regular road trips with my brother from San Diego up into the high desert through the Owens Valley, up the backside of the Sierras through Lone Pine and Crowley Lake to the great blown-out crater that was Mammoth Mountain, soon became forays deeper and farther into the desert west.

In the evening after supper I'd take a deep breath and set off in my '59 Volkswagen Beetle, with it's oval rear window, cloth roll-top sunroof, furniture wheel accelerator, and foot-thrown reserve gas tank (no gauge), bound for Utah. I felt like Lindbergh setting off across the Atlantic, and in that bare-bones can of a car with it's little airplane engine droning, sometimes it sounded and felt like I was flying at a thousand feet through the dark, thin air of the high desert. Sunroof open, stars shining in. There'd be a stop in Vegas for coffee and a donut before pressing on to St. George, Utah, en route to the Wasatch Mountain range above Salt lake City.

Sometimes an eighteen-wheeler would come barreling by, nearly pushing the Beetle right off the shoulder with it's great whoosh of air – but once it passed, I could swing that little green bucket in behind the trucker, and she'd shudder and rise up off the ground as the big semi sucked her along in it's draft. I covered a lot of road that way, attached to those big trucks like a remora attached to a shark. They didn't care, the little car's weight was so insignificant, they couldn't even feel me hitching a ride... and I think they liked the company. The feel of serving someone. I'd get 50, 60 miles to the gallon being carried along like that, and never have to worry about anything in the road – especially in that green tin can where a collision with a wayward heffer would mean oblivion for cow and boy alike.

As my host trucker finally pulled off to a road stop, I'd honk him a pallid little VW honk, and wave like a fellow sea-captain veering off into the darkness of the open ocean. And he'd always wave back, acknowledging my gratitude for the portage and protection. In those days when there was so much nothing between Las Vegas and Salt Lake, just being out there going someplace in the same direction was enough to fashion a headlight camaraderie out in the lonely desert night, navigating by the stars and the glow of a town on the horizon.

And when I finally arrived, I'd always brought very little but my several selves along. And maybe who I could be this time. Until it was time again to be somewhere else.

can be ordered online. The first book: How to Survive Life (and Death), A Guide To Happiness In This World and Beyond is available everywhere – but ask for it it at your local bookstore!
Posted by rjk at 7:25 PM